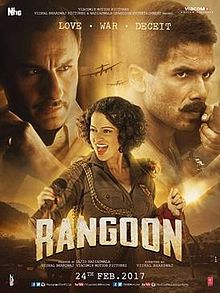 Rangoon is director Vishal Bhardwaj’s monumental and rewarding work. It is a classic, weighed and measured by the style and manner of its narrative. Adapted from the English film “Casablanca”, it is a simple romance triangle set in India, circa 1943, against the backdrop of World War II.

The plot, a trifle to hang the emotions on, involves an ex-actor turned film producer Rustom Billimoria aka Rusi (Saif Ali Khan), his lover and muse Julia (Kangana Ranaut) and the army personnel Jamadar Nawab Mallik (Shahid Kapoor) who is assigned to protect her during an arduous journey to the border, where she is deputed to entertain the Indian Army, serving under the British.

It is during this journey that the inevitable happens, she falls in love with Nawab Malik and soon realises that she is torn between the two.

The screenplay is well-designed. The narrative begins in a dispassionate tone but gradually during the course of the narrative, it emotionally hooks you on, making you root for every character.

The characters merging from various spectrums of society are deep, yet believable. They are well-etched and their backstories make them wholesome.

“Rangoon” is Kangana’s canvas. She is the soul of the film as the perky actress modelled after the yesteryear’s heroine Fearless Nadia. Her role is more difficult than it might appear. What she does here is as extraordinary in its own way as Nadia did during her times.

Her on-screen chemistry with Saif and Shahid is palpable. Kangana is downright luminescent and dives into her character’s varied and heightened emotions with aplomb.

She has the chutzpah and spunk of Julia which seems natural. There are many scenes where she shines brilliantly. But the most striking of them all is the comic scene when she dances before the Japanese soldiers hoping to break the ice with them.

Shahid portrays Nawab Malik with all earnestness. With natural ease, he internalises his character and communicates his affection through his intense gaze. He is equally flawless in the action scenes.

Saif does not have much to do. As Rustom Billimoria, he plays the aristocratic producer with elan. He is convincing as the chauvinist lover yet deeply in love who is willing to go to any lengths to get his lady-love back.

British actor Richard McCabe as Major General Harding is spot on with his dialogues peppered with Hindi. He leaves his mark on-screen with flourish.

The rest of the supporting cast too are pitch perfect and some of their scenes, in their own ways are equally tender and stirring, be it when Zulfi, the make-up artiste and Julia’s confidante, is mercilessly shot, the Japanese soldier held captive by Nawab and Julia makes a desperate attempt at a getaway and when the woman soldier is killed before her son.

Visually, the look and feel of the film is magnificent yet simply realistic. The landscape is beautifully exploited and the period created by Production Designers Subrata Chakraborthy and Amit Ray along with Dolly Ahluwalia’s striking costumes captured by Pankaj Kumar’s cinematography, are rich and rewarding.

The songs “Bloody hell” and “Mere miyan gaye England” are beautifully choreographed as well as picturised, while “Yeh ishq hai’ is soulful. Also, Bhardwaj’s lavish score tugs at your heartstrings as it complements the visuals.

Overall, “Rangoon” masterfully weaves a drama that keeps you enraptured till the very end.