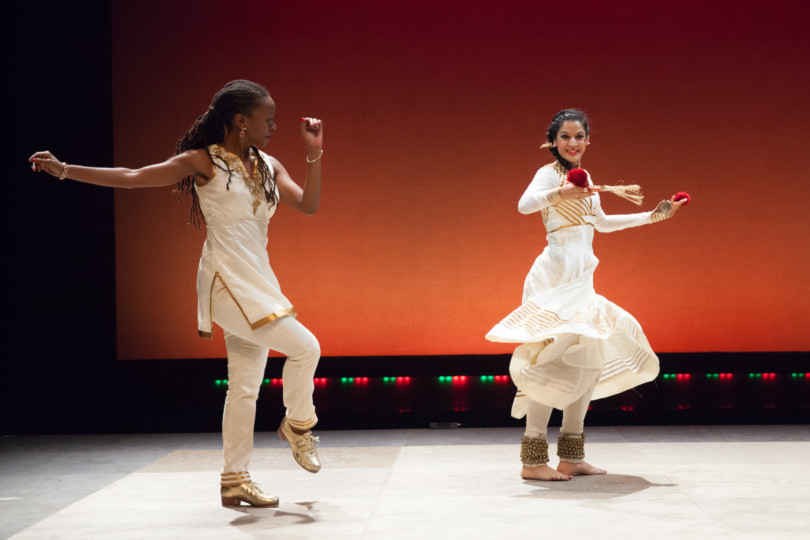 A Q & A with the artists will follow the performance, which is free and open to the general public. Reservations are recommended but not required.

Indian Kathak dance and American tap dance, continents and ages apart, share parallel stories of struggle and perseverance. They come together in this extraordinary collaboration that is rhythm, poetry, storytelling, music and dance.

SPEAK carries forward the legacy of iconic artists like Pandit Chitresh Das, Jimmy Slide and James Buster Brown, while bringing to the forefront the voices of a new generation of female artists. Serving as the bridge between tradition and innovation, history and progress, Rina Mehta, Rachna Nivas, and Dormeshia Sumbry‐Edwards create nothing short of magic on the stage.

SPEAK will receive its world premiere on March 24, 2017 at the Yerba Buena Center for the Arts in San Francisco, before coming to the College of the Holy Cross. For more information, visit the Arts Transcending Borders website www.holycross.edu/atb or call 508‐793‐3835.

Rachna Nivas is a charismatic performer, mentor to many, and a powerful leader amongst today’s generation of Indian classical artists, bringing a contemporary voice to Kathak. Deemed “revelatory” by the San Francisco Chronicle, Rachna has an extensive performance career to great acclaim across the U.S. and India, both as a soloist and principal dancer with the Chitresh Das Dance Company. She was nominated for an Isadora Duncan Dance Award as part of CDDC, received the Alliance for Traditional Arts Apprenticeship Grant, and the Zellerbach Family Foundation Community Arts grant.

She is a senior disciple of the late legendary master, Pandit Chitresh Das and the former Director of the Chhandam School of Kathak, one of the largest classical Indian dance institutions in the world.

Rina Mehta, founder and Artistic Director of The Leela Institute, is one of the most powerful Kathak artists of her generation. She is a senior disciple of the late Kathak icon, Pandit Chitresh Das and has performed to great acclaim across the United States and India, both as a soloist and principal dancer with the Chitresh Das Dance Company. She received a Fulbright Award for Dance, an Alliance for California Traditional Arts Apprenticeship Grant and twice been nominated for an Isodara Duncan Dance Award as a part of CDDC.

She is a pioneer and strong leader amongst her generation, taking Kathak forward and carving a place for the ancient art form in modern times.

Dormeshia Sumbry‐Edwards has been a part of almost every major Tap movie or show that has appeared in the history of tap dance since the 80’s. Accolades include an Astaire Award for Best Performance, the Bessie Award, and the Hoofer Award. She is founder of Harlem Tap Studio and performs extensively at shows and festivals around the world. She was elected to the Advisory Board of Dance Magazine and nominated the official Tap Spokesperson for Capezio.

Mrs. Sumbry‐ Edwards was also Michael Jackson’s private tap instructor for eleven years. She is revered as one of the most dynamic performers in the industry today.

Founded in 1843, the College of the Holy Cross, located in Worcester, MA, is among the nation’s leading liberal arts institutions. A highly selective, four‐year, exclusively undergraduate college of 2,900 students, Holy Cross is renowned for offering a rigorous, personalized education in the Jesuit, Catholic tradition.