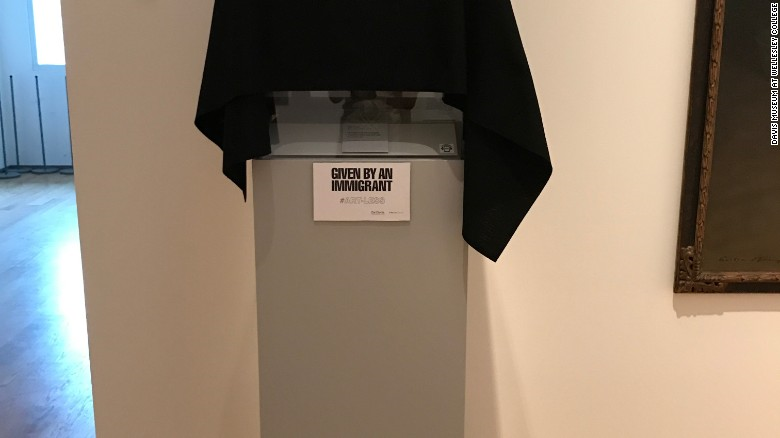 WELLESLEY, MA— The Davis Museum at Wellesley College, where 20 percent of their art collection is either created or donated by immigrants, has removed or cloaked these works to demonstrate symbolically what the Davis Museum would look like without their contributions, the museum said on its website.

“Approximately twenty percent of the works of art on view in our permanent collections galleries were created by artists or donated by collectors who immigrated to the United States,” the statement said. “For the days leading up to and including the Presidents’ Day holiday weekend we have removed or cloaked these works to demonstrate symbolically what the Davis Museum would look like without their contributions to our collections and to Wellesley College, and to thereby honor their many invaluable gifts.”

Absences created by the removal or obscuring of works from view will be marked with labels that indicate “made by an immigrant” or “given by an immigrant.”

The removal of art February 16 through February 21, will demonstrate the critical role that immigrants to the United States have played in the arts, both in their creative contributions as well as their stewardship of the visual arts, with an initiative called, Art-Less, the museum said in a press release.

In support of the American Association of Museum Director’s statement on President Trump’s recent executive order, the Museum will de-install or shroud all works of art in its permanent collections galleries that were either created by or given to Wellesley’s art collection by immigrants to the United States. This means approximately 120 works of art—roughly 20 percent of the objects on view in the Museum’s permanent collections galleries—will be either taken down or covered in black cloth.

“Every permanent collections gallery will be affected by the subtraction of works created by or given to the Museum by an immigrant to the United States,” said Claire Whitner, Assistant Director of Curatorial Affairs and Senior Curator of Collections, and overseer of the project.

“Art-Less demonstrates in stark and indisputable terms, the impact of immigration on our collections,” said Lisa Fischman, the Ruth Gordon Shapiro ’37 Director of the Davis, “and we proudly take the opportunity to signal that impact, to honor the gifts of creativity and generosity that make the Davis Museum and the Wellesley community great.”

In one particularly poignant example, the space that is usually occupied by a stately portrait of George Washington will be bare, even as President’s Day takes place on Monday, February 20. Painted by the Swedish-born artist, Adolf Ulrik Wertmüller, who came to the United States in the 1790s, this oil painting was given to the Davis Museum by the Munn family, immigrants to the United States from Sweden after World War II.

Another illustration of significant impact will be in the African galleries: visitors will be met with a sea of black cloth as a majority of the works—nearly 80 percent—was donated by the Klejman family, who immigrated to the United States from Poland after World War II, just five years before their daughter became a student at Wellesley College.

With the help of arts advocates from cultures worldwide, the Davis Museum at Wellesley College continues to strengthen its culturally diverse collection, which spans global history from antiquity to the present and include masterpieces from almost every continent.

One of the oldest and most acclaimed academic fine arts museums in the United States, the Davis Museum is a vital force in the intellectual, pedagogical and social life of Wellesley College. It seeks to create an environment that encourages visual literacy, inspires new ideas, and fosters involvement with the arts both within the College and the larger community.

Since 1875, Wellesley College has been a leader in providing an excellent liberal arts education for women who will make a difference in the world. Its 500-acre campus near Boston is home to some 2,400 undergraduate students from 49 states and 58 countries.