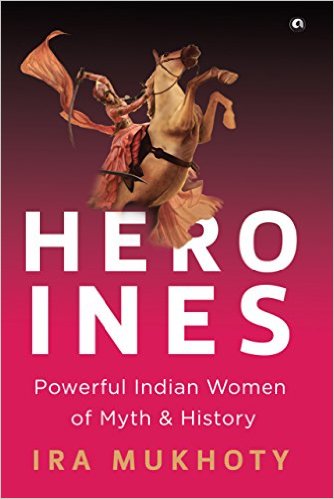 Long before the concept of women’s emancipation became a realisation in the Western world, Indian history and mythology were already adorned by a series of prominent women figures who shattered all prevailing notions of the time. A new book wonderfully captures this facet.

Although the notion of heroism among men generally revolves around “physical strength and extravagant bravery” the same proposition is not easily defined for women, argues author Ira Mukhoty in “Heroines: Powerful Indian Women of Myth and History”.

The book paints engrossing portraits of eight “Heroines” from Indian history and mythology, throwing light on a very significant aspect of the country’s cultural heritage.

“Men have had, historically, a much wider tapestry against which to play out their feats. Stormy rivers to navigate and savage continents to discover and subjugate. Women’s heroism has tended to be of a very different nature, less easily contained and categorised,” contends Mukhoty.

In “Heroines” we meet lotus-eyed, dark-skinned Draupadi, Dharma Queen, whose story emerged almost three millennia ago; the goddess Radha who sacrificed societal respectability for a love that transgressed convention; Ambapali, a courtesan, who stepped out of the luxurious trappings of Vaishali to follow the Buddha and wrote a single, haunting poem on the evanescence of beauty and youth.

We also come across Raziya, the battle-scarred warrior, who proudly claimed the title of Sultan, refusing its fragile feminine counterpart, Sultana; the courageous Meerabai who repudiated her patriarchal destiny as cloistered daughter-in-law of a Rajput clan; the gentle Mughal princess Jahanara: who claims the blessings of both Allah and the Prophet Muhammad and wishes ‘never to be forgotten’.

And then there are two more known figures, Laxmibai, widow, patriot and martyr, who rides into legend and immortality fighting for her adopted son’s birthright; and Hazrat Mahal, courtesan, begum, and rebel queen, resolute till the very end in defying British attempts to seize her ex-husband’s kingdom.

The underlying theme that connects all the women in the book is their “unassailable belief” in a cause for which they are willing to fight, in one form or another, unto death. “In every case this belief, whether it has to do with a divine love, a mystic truth, or a denied kingship, leads them to a confrontation with a horrified patriarchy,” writes Mukhoty.

More importantly, each of these women are a challenge to the accepted status quo of the honourable woman living in the Indian society. The author has chosen Draupadi, a much contended character from Indian mythology, as the fulcrum of the offering.

“Though she fails and makes mistakes, and is shockingly volatile, she will remain all her life true to the call of her heart. She maintains her claim for vengeance and justice though it casts her, alone, against all the forces of the ruling patriarchy,” says Mukhoty.

And then there is also the example of Laxmibai, who was transformed into a “jezbel, an object of libidinous curiosity” in colonial narratives. She was later hailed as a freedom fighter while her previous role as an able diplomat and ruler has been clearly wiped off our memories.

To cut a long story short, all of these women are those who may not be accepted as “the honourable woman”. Women in India, for instance, have long been urged to follow Sita’s example of “wifely submission” while the image of Draupadi “rails against a culture that values a king’s duty and a brother’s loyalty above a wife’s honour”.

The author, to a large extent, succeeds in restoring these remarkable figures to their rightful place in our collective psyche. The offering makes for a refreshing read and is a well-researched, documented and splendid attempt to correct some of our historical ignorance.

More than anything else, this book is a fitting mirror to the Western world, reminding them that long before women rose to equality in that sphere, these Indian women had already risen to the highest levels of Indian society. (IANS)