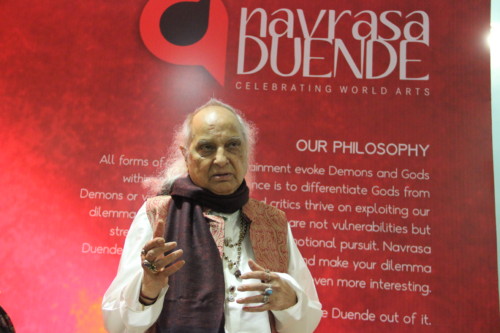 The concert, titled ‘My Journey: An Intimate Evening with Sangeet Martand Pandit Jasraj’ took place on January 28, 2017 at Jawaharlal Nehru Stadium, and saw the musical virtuoso give a masterful performance on a day that also marked his 87th birthday. Another highlight from the evening was the memorable interaction with Pandit Jasraj who shared fascinating anecdotes from his personal life.

In Chai With Manju, Pandit Jasraj Talks About Love, Music and His Philosophy of Life

The occasion also marked the official launch of Navrasa Duende, introducing the audiences to the organisation and providing a glimpse of its future endeavours. Navrasa Duende’s offerings will include unique productions of live entertainment across countries comprising music, dance, theatre, cinematic arts, visual arts, literature, architecture, and at times blending multiple genres.

“Young people today are exposed to so many different genres of music and are more open to various musical cultures and forms. I have always found them in attendance in large numbers at classical concerts, appreciating the music on offer. There are more crowds and more interest in classical music compared to just a decade back. The ever-increasing reach of the internet and social media has served to bring many more art forms into the limelight. I am very happy to see the dedication and enthusiasm with which Navrasa Duende is working towards bringing various art forms from around the world to Indian audiences and am overwhelmed with the reception I have received at its maiden concert,” Pandit Jasraj remarked.

Commenting on the event, Dinesh B. Singh – Founder, Navrasa Duende said, “We have been extremely honoured and proud to have hosted a musical legend of such high stature like Pandit Jasraj in our very first concert. Listening to Panditji is nothing less than a spiritual experience.  With this concert, Navrasa Duende has begun its journey dedicated towards the promotion of various forms of performing and fine arts from around the world. We also aim to foster a special connection between artists and audiences globally to provide a unique entertainment experience.”

With an innovative approach aided by latest technologies, Navrasa Duende plans to reach a wide audience around the world to promote multiple art forms and cultures through an assortment of productions and performances slated for its inaugural year.

Navrasa Duende is a new venture from Energo India (a renowned 28-year-old Indian industrial group) in the realm of arts and entertainment. The organisation has its roots in its founder’s strong belief in promoting the performing arts of all genres, including modern, traditional, and popular works from India and around the world. The company endeavours to create, manage, and promote unique productions of live entertainment across countries in a wholesome way, covering music, dance, theatre, cinema, visual arts, literature, and tourism, sometimes blending multiple genres.