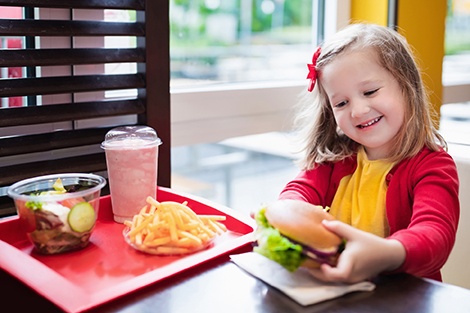 BOSTON – U.S. chain restaurants participating in a National Restaurant Association initiative to improve the nutritional quality of their children’s menus have made no significant changes compared with restaurants not participating in the program, according to a new study led by Harvard T.H. Chan School of Public Health.

Among both groups, the researchers found no meaningful improvements in the amount of calories, saturated fat, or sodium in kids’ menu offerings during the first three years following the launch of the Kids LiveWell initiative in 2011.

They also found that sugary drinks still made up 80% of children’s beverage options, despite individual restaurant pledges to reduce their prevalence.

The study was published online January 11, 2017, in the American Journal of Preventive Medicine.

“Although some healthier options were available in select restaurants, there is no evidence that these voluntary pledges have had an industry-wide impact,” said lead author Alyssa Moran, a doctoral student in the Department of Nutrition at Harvard Chan School. “As public health practitioners, we need to do a better job of engaging restaurants in offering and promoting healthy meals to kids.”

In 2011 and 2012, more than one in three children and adolescents consumed fast food every day, according to the study. For kids, eating more restaurant food is associated with higher daily calorie intake from added sugar and saturated fats.

This is the first study to look at trends in the nutrient content of kids’ meals among national restaurant chains at a time when many were making voluntary pledges to improve quality. By 2015, more than 150 chains with 42,000 locations in the U.S. were participating in Kids LiveWell—which requires that at least one meal and one other item on kids’ menus meet nutritional guidelines.

Using data obtained from the nutrition census MenuStat, the researchers examined trends in the nutrient content of 4,016 beverages, entrees, side dishes, and desserts offered on children’s menus in 45 of the nation’s top 100 fast food, fast casual, and full-service restaurant chains between 2012 and 2015. Out of the sample, 15 restaurants were Kids LiveWell participants.

The researchers found that while some restaurants were offering healthier kids’ menu options, the average kids’ entrée still far exceeded recommendations for sodium and saturated fat. Kids’ desserts contained nearly as many calories and almost twice the amount of saturated fat as an entrée. And even when soda had been removed from children’s menus, it was replaced with other sugary beverages such as flavored milks and sweetened teas.

The authors would like to see the restaurant industry adhere to voluntary pledges and consider working with government agencies, researchers, and public health practitioners to apply evidence-based nutrition guidelines across a broader range of kids’ menu items. They also suggest tracking restaurant commitments to determine whether restaurants currently participating in Kids LiveWell improve the nutritional quality of their offerings over time.

Senior author of the paper was Christina Roberto of the University of Pennsylvania’s Perelman School of Medicine.