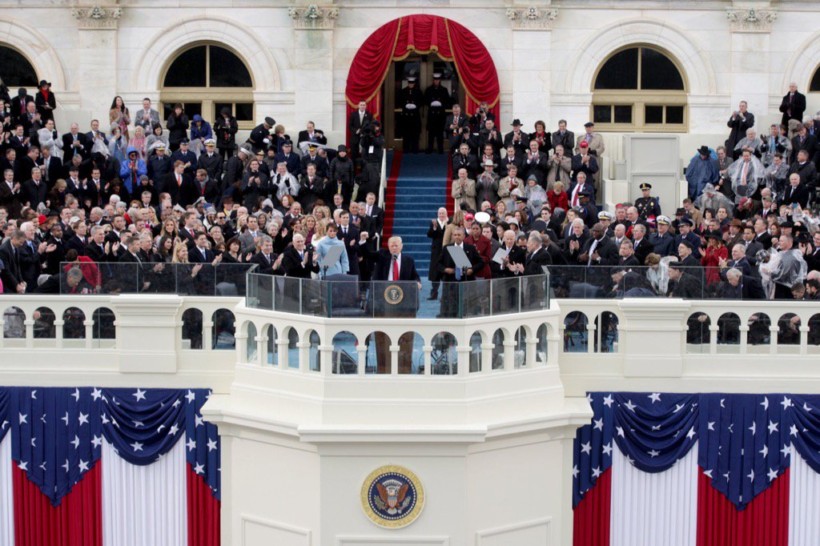 New York–Donald Trump became the 45th president of the United States under a cloud – literal and metaphorical – on Friday, launching the globe’s most powerful nation and the world on an uncharted course with a clarion call of “America First” to “bring back our wealth… our dreams”.

While the sky was overcast with occasional light drizzles, he faced a challenge to the legitimacy of his presidency over the Russian attempts to meddle in the campaign and the fact that he got fewer popular votes than Democratic rival Hillary Clinton.

An outsider who fought his way to the White House riding a wave of discontent among insecure Americans, Trump, however, won the majority in the Electoral College by focusing on states that were most ravaged by the de-industrialisation.

Challenging the established norms, he won by spending only $923 million to Clinton’s $1.2 billion — or about 66 per cent – and antagonising the establishment across the national spectrum, including his own Republican Party.

In the middle of all this uncertainty, a clear picture of India under Trump has to emerge.

During the campaign Trump promised to be a friend to India, but the country hasn’t figured so far in the post-election tweets and statements.

While he has praised the free-enterprise ideology of Prime Minister Narendra Modi and his leadership, Trump has had only one known telephone chat with him. It is still to be seen how their personal relationship will develop – whether it will be as close as that between Obama and Modi.

One area where India is feeling the heat is in trade and business. Trump has taken aim at outsourcing, H1-B visas for professionals that is the lifeblood of Indian and US business interactions in the new economy, and at the pharmaceutical industry which is India’s major exporter to the US.

For the first time, an Indian-American, Nikki Haley, has been appointed to a cabinet-level post as US ambassador to the United Nations, the second-most visible foreign policy job.

Trump’s populist style of a rhetorical flame-thrower endeared him to his base but turned sections of the opposition to implacable foes that now question his legitimacy and others into skeptics.

About 70 members of the Congress boycotted the ceremony, backing the African American civil rights leader John Lewis who denounced Trump’s election as illegitimate.

He started the day with less than 40 per cent approval rate and protests outside the ceremony and around the country, even as his core supporters rallied behind him

And now he has to unify the nation, while seeming to deliver on his promises.

The reality of the office and the challenge seemed to weigh on Trump as came out of the church Friday morning and later at the swearing-in. He looked uncharacteristically somber, with careworn eyes.

A businessman and TV personality with an outsize ego and a style to match, Trump has no previous government experience, except as an outsider negotiating deals with governments.

The likely way of governing that has emerged so far from his actions so far is the transactional style of a businessman looking for deals and bargaining with outlandish offers that get whittled down in the give and take before an agreement is reached.

So far he has met with a large number of high-profile businessmen in pursuit of his promise to increase employment and investments in the US, especially in manufacturing.

His challenge would be to translate this to governing and dealing with domestic and foreign politicians unused to this style and with political egos unused to the way business, especially in real estate, is conducted. He would have to also modify his style to get anything done.

Since his election he has questioned the prevailing world order: Reached out to Russia as an ally in the war against radical Islamic terrorism; expressed skepticism about NATO; was seen as disrespectful to leaders like German Chancellor Angela Merkel; rankled China and its US supporters by talking to Taiwan’s leader and laying out a threat of economic retaliations; calling for modernising the nuclear arsenal, while also saying that Japan and others should develop their nuclear arsenal; raising taxes on imports, and building a wall on the Mexican border.

Now as President he will have to cut through this thicket of promise and reality as he pursues his prime foreign goals of lessening direct US involvement abroad, while fighting Islamic radicalism and resetting ties with Russia and simultaneously with the allies in Europe and elsewhere. But overshadowing it all is his promise of bringing jobs back and disowning trade pacts.

Domestically, he promised to repeal and replace Obamacare, the signature health insurance programme of Obama, increase manufacturing and jobs and cut taxes, while he would “drain the swamp” of Washington nexus of establishment and lobbyists.

Congress is well on its way to repealing Obamacare – a programme hated by the right – that could leave millions, including a large swathe of Trump supporters, without health insurance in a nation of astronomical medical costs.

He has managed a good start on the employment front, with businesses promising tens of thousands of jobs in the US since his election.

But his cabinet is virtually unformed because the Senate’s Democrats are slowing the approval of his appointees. Moreover, as an outsider, he has scrambled to find candidates for the several hundred political appointments that are essential to running his government.

Despite his populist lectures about uncaring Wall Street and businesses and promise to drain the swamp, billionaires and bankers dominate his cabinet as Democratic Senator Chuck Schumer pointed out.

Even his nominee to head the State Department is Rex Tillerson, the chairman of the oil giant ExxonMobil.

Trump started his first day in office borrowing a junior Obama official, Under Secretary of State Thomas A. Shannon Jr., as the acting secretary of state, and Deputy Defense Secretary Robert Work to be interim head of Defence.

He is also retaining 50 Obama appointees to keep the government running as he scrambles to fill more than 600 posts. (IANS)

On US election home stretch, one dominant theme: How Trump can win again

Indian Americans Have a Lot to Say About Trump and Biden, and Here Are Some in Their Own Words