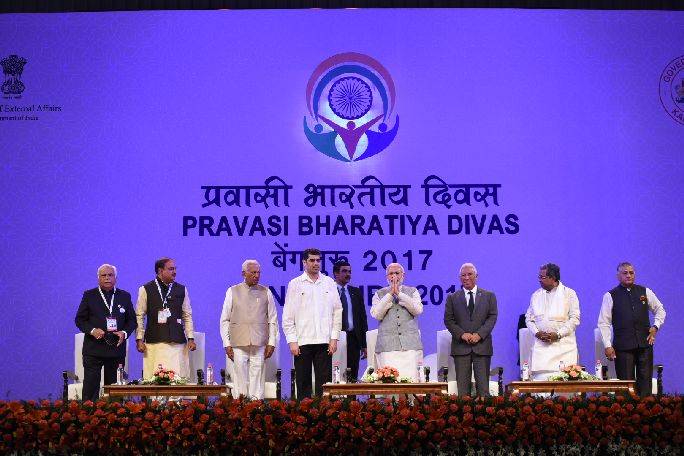 Bengaluru– Prime Minister Narendra Modi on Sunday urged the Indian diaspora to first develop India by investing and contributing its expertise in the land of its origin.

“To me, FDI means First Develop India through Foreign Direct Investment, whose norms have been fully liberalised for Non-Resident Indians (NRIs) and Persons of Indian Origin (PIOs) and made on par with domestic firms for availing same benefits,” Modi told the the 14th Pravasi Bharatiya Divas (Non-Resident Indian Day) here.

“Diaspora can contribute to India by sparing their time and energy on implementing our flagship programmes and stay connected,” said Modi during a 40-minute special address in Hindi and English.

Asserting that engaging with the overseas Indian community was a priority area for him, the Prime Minister said the government was trying to convert ‘brain drain’ into ‘brain gain’ by inviting the diaspora to contribute their mite in making India strong and self-reliant.

“Brain drain has been considered a loss for the country as Indians went abroad seeking jobs and better life. But for me and my government, such a movement is not a brain drain but brain gain as they can help us in the development,” noted Modi.

The programme will train the job-seekers with soft skills so that they do not feel strangers in the country they migrate to in terms of manners and culture.

Modi also appealed to all persons of Indian origin living the world over to convert their PIO cards into Overseas Citizen of India (OCI) card at the earliest.

“We are working on new procedures to ensure all descendants of Indians, especially their fourth and fifth generations living in Fiji, Suriname, Guyana and Caribbean states to become eligible for OCI cards,” Modi said.

Clarifying that the government does not see the colour of the passport but the blood ties, the Prime Minister said the PIO card superseded the individual’s passport as far as his or her ties to India were concerned.

When the PIO card is seen, “we don’t see the colour of the passport but the blood ties”, Modi said to huge applause.

Referring to Mahatma Gandhi’s return from South Africa, Modi said this day marked the return to India of one of the greatest Pravasis and that his government’s priority was to convert “brain drain” into brain gain”.

“NRIs and PIOs have made outstanding contributions. Among them are politicians of great stature, scientists of repute, outstanding doctors, brilliant educationists, economists, journalists, musicians, engineers, bankers and did I mention our well known technology professionals,” added Modi. (IANS)