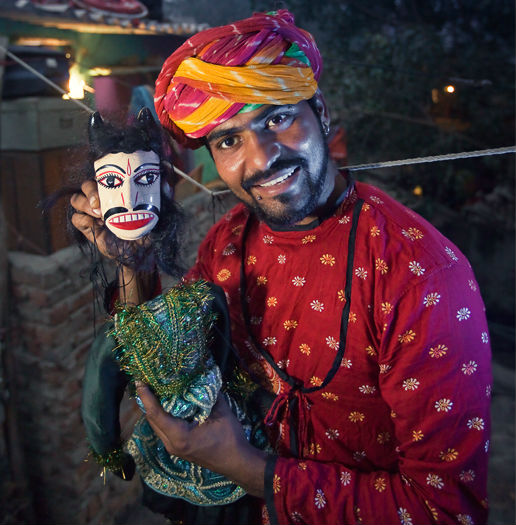 New Delhi– India’s largest artist ghetto, Kathputli Colony, is a curious chapter in Delhi’s book of shanty clusters. While demolitions and displacements are a constant fear in most slums, the rich artistic heritage and the ethereal way of living with a sense of community and cultural ethos are what sets it apart from others of its kind.

The colony is the first slum taken up for in-situ redevelopment by a private firm in which the residents are being relocated to Anand Parbat for a period of two years while “jhuggis” are replaced with multi-story buildings on the same land.

“It is not just a colony for us but a way of life. I have lived my entire life here, I have seen my children grow up in this carefree environment where they have been surrounded by hundreds of artists, magicians and acrobats. Our life here has been as lively as a circus,” Anil, a musician by profession, told IANS.

Old-timers recalled how a normal evening in the colony would suddenly transform into a celebration of art and culture.

“I remember this very old incident when a boy from the colony stood first in his exams. His father was a musician and he started singing out in the open and was soon joined by several artists, who added to the celebration. Nobody paid them to do so, this is how we have lived,” said Brij Ram, 64, a resident of the colony.

Last week, a bulldozer razed an over 10-foot Delhi Metro Rail Corporation (DMRC) wall, located very close to the jhuggis of Kathputli Colony. DDA officials claimed that they had necessary permissions to carry out the demolition but many local residents as well as NGOs are fearful that it was done to create a passage for the bulldozers to enter the slum.

Nasrin is one of the many residents who has refused to move from the colony and sign the contract to temporarily relocate to a transit camp.

“It was as if they were going to break my home next,” she says. “My walls shook, my child looked at me in fear and all of us rushed out.” Nasrin has twice refused to sign the documents and move to the transit camp.

In 2009, the central land owning agency had reportedly signed a Rs 6 crore-deal with Raheja Developers to build multi-storey flats in the area to resettle resident families and use the remainder of 5.2 hectare Kathputli Colony land to build commercial properties. After a gap of seven years, the authorities have sprung into action and want to shift the residents to the Anand Parbat transit camp.

The community of artistes and street performers are still in shock over the heavy deployment of police and paramilitary forces in the colony. Some have even stopped going for work, saying that they are fearful of their houses being demolished in their absence.

Meanwhile, about 400 residents have been relocated to Anand Parbat. A DDA official at the site said, “Police have been deployed to ensure a peaceful demolition drive. There are some locals who do not want the demolition due to their vested interests. But families are cooperating. Till our last report, 400 people have voluntarily agreed and been issued demolition slips.”

The colony that was only yesterday a celebration of art and cultural ethos is today caught in the dilemma of resistance vs displacement. While the locals, as per DDA offcials, will be guaranteed new flats in a two-year period, the fear of never returning to Kathputli Colony looms large over a significant number of residents. (IANS)