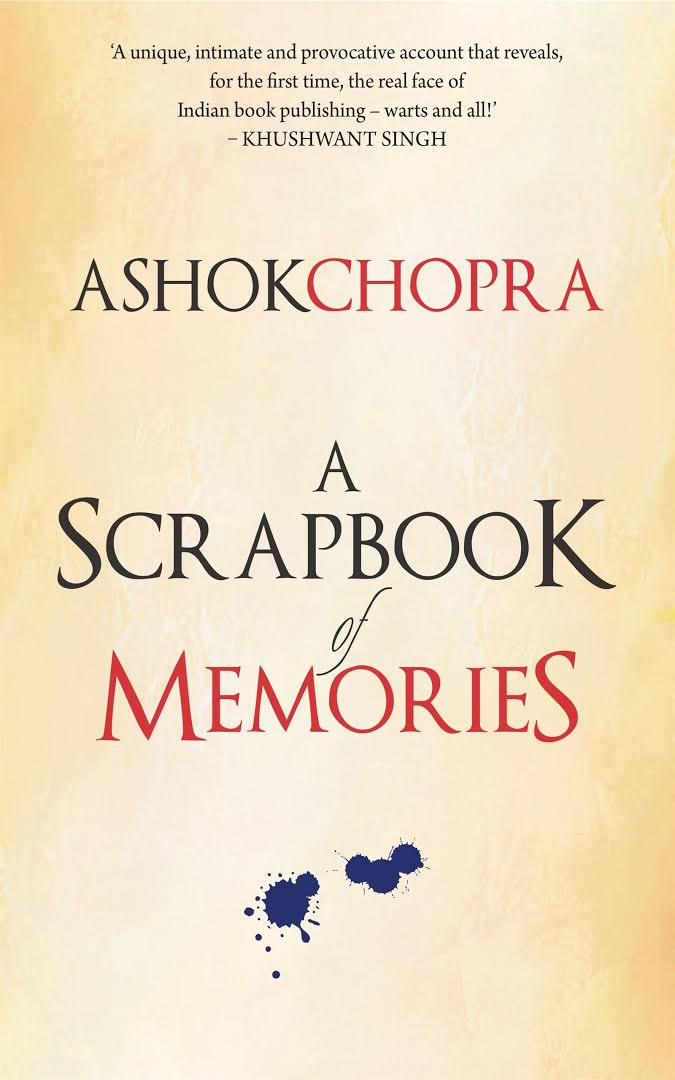 For an unrivalled and intimate look into the life, predilections and scandals of celebrities across the spectrum, from politics to films, cultural and educational levels of a people and their prospects, and close accounts from the frontlines in the battles over freedom of expression, no one can beat a top publisher.

And Ashok Chopra, who began as a journalist but soon found his real calling in the publishing industry where he was associated with almost all top Indian establishments — Vikas Publishing House, Macmillan India, UBS, India Today Book Club, HarperCollins India and currently Hay House India — does not disappoint.

Chopra, who begins with a most thorough examination of the definition of a (successful) publisher, stresses it is not an autobiography or nor a memoir but instead “a journey with, and through, the written word; a journey with the life and times of authors, writers, poets, singers, composers, lyricists, actors, directors, literary agents, publishers and their publishing houses, artists, painters and designers” he has published or interacted with.

All the same, it well justifies its provocative subtitle “My Life With the Rich, the Famous, and the Scandalous”, providing rare and valuable insights into a remarkable cross section of Indian cultural icons as they were, not only as they presented themselves — or were presented — to the public gaze.

While there are ego issues, pride, prejudice, jealousy, and other less than salutary instancess of other human emotions, there is also generosity and humility, even as not many of those featured come out with flying colours.

Among those who do, the foremost is that “Vintage Sardar”, Khushwant Singh, with whom Chopra had a long and close personal and professional relationship but could never convince to adopt his idea of titles. Then Shobha De proves to be as frankly direct and decisive in life as in writing (but quite amenable to adulation, which Chopra arranged artfully), and Raj “Jaani” Kumar, despite all his eccentric public behaviour, proved to be a committed and knowledgeable reader of books (which can excuse much).

And veteran diplomat J.N. Dixit was careful and meticulous in writing as in safeguarding Indian interests in international negotiations.

On the flip side, there is a remarkable range of unlikely Casanovas, a sex-addicted Bollywood actor whose rejected autobiography led to a caustic comment that left Chopra at a loss, an artist who proved to be quite ungrateful, film stars who did not keep their commitments, and the like.

There are also some historic moments, both public (then Punjab Chief Minister Giani Zail Singh contesting a century and more of evolutionary theory at an address to an anthropologists convention in Chandigarh — and the author’s impish attempt to recast how it may have sounded in Punjabi; a fierce but civilised fight between T.N. Seshan and Mani Shankar Aiyar) and relatively private (then Prime Minister Indira Gandhi’s cold snub — as only she was capable of — to poet and writer Dom Moraes as he tried to present a copy of his biography of her) and more.

Among the best, though not for the industry, is his account of Indian publishing’s (and cinema’s) biggest fiasco, which may have helped to put the brakes on a potentially lucrative genre of film novelisations, that of Krishna Shah’s “Shalimar”.

This, Indian filmdom’s first attempt to make a global film, was thoroughly stillborn, but witnessed some juicy episodes — Zeenat Aman’s triumph over the legendary Gina Lollobrigida in a dare-all, cleavage and thigh display contest which left the latter so picqued that she did not sign on for the project. This forced her replacement by the largely unknown Sylvia Miles, who created a farcical flutter at dinner one night which afforded Shammi Kapoor and O.P. Ralhan a good laugh at least.

But apart from loosely-connected series of accounts of people, places and situations, he provides a selection of frequently trenchant, arguable but cogently-argued opinions on issues, ranging from those facing his industry to those with wider social import, such as great authors he has read, the effect of rising of intolerant fundamentalism, the status of books (and the Indian publishing industry) and what it means for Indian literacy, knowledge and expertise. This alone makes it a valuable read for any bibliophile.