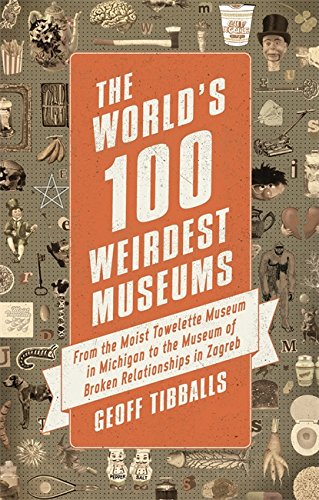 If you have a penchant for collecting something strange, say car horns, chocolate wrappers, or college yearbooks, of which your family or friends can never see the point, go on. If you amass a sizeable collection, your display may soon be among some unique museums dedicated to all sorts of improbable subjects: lawn-mowers, Japanese instant noodles, broken relationships, hammers, mustard, baked beans and more.

“When we think of the world’s great museums, we tend to think of the Louvre, the Guggenheim or the Victoria and Albert,” notes journalist-turned-author Geoff Tibballs, but not the “Dog Collar Museum, the Kansas Barbed Wire Museum, the Museum of Broken Relationships or Barney Smith’s Toilet Seat Art Museum”.

Or for that matter, the Cuckooland Museum, the French Fry Museum, the Paris Sewer Museum, the Red Light Secrets Museum of Prostitution, the Beijing Museum of Tap Water, the Mad Max 2 Museum, and many others. 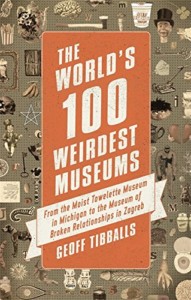 And here, we are not only introduced to 100 such institutions, spanning “serious collections housed in grand buildings” to “others located in tiny premises and open to visitors by appointment only”, across six continents, but Tibballs actually visits each to give us a vivid feel of the place and interacts with their founders, or those in-charge, to find out the rationale for its existence. For those interested, the address, contact, admission details and costs are provided.

With the author’s previous works including “The Mammoth Book of Jokes” and “The Mammoth Book of One-Liners”, the presentation is quite humorous (but the British sort with puns, wry, understated remarks and hyperbole) but still gives an unmatched view, as Tibballs finds a variety of obsessions and reasons for collecting and displaying a wide range of objects, both natural and man-made, or facets of wider aspects of human life and condition, and the natural world.

The museums begin from those devoted to items of daily use like teapots, pencils, milk bottles, socks or even beer cans, to those with rather not-so-common and somewhat specialised use like sex machines, barbed wire, ventriloquists’ dummies and torture implements (though there is a separate museum of dentistry too).

Food and drink have pride of place, ranging from the simple banana or carrots to the currywurst (German pork sausage with ketchup and curry — and if you think what is the point, the museum attracts 350,000 visitors in a year), a Swedish pickled herring that smells horrible, and yes, Ramen noodles.

Then some chronicle human health — using specimens of diseased organs, deformed foetuses, old surgical instruments and even tapeworms — commemorate disasters (the Andes plane crash of 1972 and the miraculous survival of a few passengers — and how), folklore (vampires, leprechauns, etc), professions or rather a lack of them (hobos), and even weather phenomenon (Italy’s cold, dry Bora wind).

Then there are those which are elaborate, satirical jokes — the Nomuseum in Vienna, where you can notice a range of failed inventions as well as the third buttonhole from the top of Napoleon’s tunic, and a museum in Finland’s Uusikaupunki “exhibiting the worthless products of an entirely fictional multinational corporation” — or those which seek to commend committed but unsuccessful endeavour in the form of burnt food and bad art.

Indians will be happy to know that they get two entries — the Sudha Cars Museum of Hyderabad, where Kanyaboyina Sudhakar exhibits the cars he has made in various unique shapes, and the Sulabh International Museum of Toilets in New Delhi.

As we learn, some of these people’s dedication is unmatched. Take former computer programmer Barry Kirk, whose motto is “to baldly go where no man has been before”, not only runs the world’s only baked beans museum (even Heinz who had a showroom at its Pittsburgh plant had to shut it down), but has daily, for two decades now, “painted his face and bald head orange before donning an orange cape, green pants and an orange jumpsuit to transform himself into the world’s only haricot bean superhero, Captain Beany”.

Tibballs’ book, however, should not be dismissed as a mere collection of oddities but rather a tribute to human endeavour, ingenuity, individuality, and, of course, occasional stupidity too. (IANS)