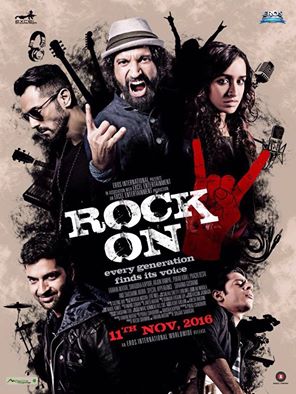 A sequel to the 2008 film, “Rock On!!”, which was about the coming together of a band called Magic, this one is more than the reinforcement of the band.

The narrative begins with the band being dismantled once again not because of differences between the team members, but because each one of them has their own demons to deal with.

Aditya (Farhan Akthar) hounded by the guilt of a suicide case, settles in Meghalaya with his solitude and the villagers, helping them have a better life.

Joe Mascarenhas (Arjun Rampal), concerned about who is going to pay his bills, becomes a club manager and a reality show judge. Kedar Zaveri or KD (Purab Kohli) is still trying to find a balance between his friends and himself.

The trio and their families reunite in Meghalaya for Aditya’s birthday and they decide to reassemble their once famous band.

It is only when the five of them assemble at Joe’s office, that there is an instant acceptance, but not without their own hurdles.

Meanwhile, disaster strikes in the form of a forest fire and destroys the village Aditya had adopted. So, he goes back to Meghalaya to salvage the villagers from their miseries. And what better way to raise funds than a rock concert.

The story credited to Abhishek Kapoor and Pubali Chaudhari is interesting, but the plot is staid and formulaic with each scene packed with conflict, making the entire tale seem dramatic and forced. Also, the blatant plot holes due to the cinematic liberties taken make viewing a dreary fare.

With no memorable lines and the use of staid imagery, the dialogues written by Farhan are lame and run-of-the-mill.

The characters too don’t grow organically and thus there is a dissent with the viewers.

Farhan with his weak coarse voice as the lead singer is not imposing. Though he strives to put his heart into the character, he fails miserably while internalising his pain and his forlorn, unkempt look further accentuates his clumsiness.

Purab, though suave, is perfunctory and so is Arjun.

Prachi Desai as Sakshi, Aditya’s wife, with her blunt haircut and sedate outfits looks like she has just emerged from the Hollywood films of the 1960s.

Shraddha Kapoor as Jiah Sharma, and the talented Shashank Arora as Uday, who we had witnessed in the noir film “Titli” are good, but limited.

In supporting roles, topping the list is Kumud Mishra in a restrained performance as Pandit Vibhuti, Jiah’s father. He is unfaltering when he sermonises, “Kya, yeh sangeet hai?”, (Is this music?) to his son Rahul or when he is silent when Jiah argues with him in a tele conversation.

The others who have their moments of onscreen glory are the characters who play Rahul Sharma, Jiah’s brother and Manjot – a reality show contestant. They both show promise.

Mounted with excellent production values, the film is visually glossy and vibrant. The locales and the massive sets are beautifully exploited by cinematographer Marc Koninckx’s camera work.

The snappy edits by Anand Subaya keep in tune to the genre of the film.

Music by Shankar-Eshaan-Loy is well integrated into the narrative, but they do not propel the narrative. The title track that plays often is effectively used to pump adrenaline. The choreography in some songs is clumsy though.

Unfortunately, unlike the prequel, this film is not made with a passion for music. Instead, it is made with the intent of exploiting the franchise and it fails miserably. (IANS)