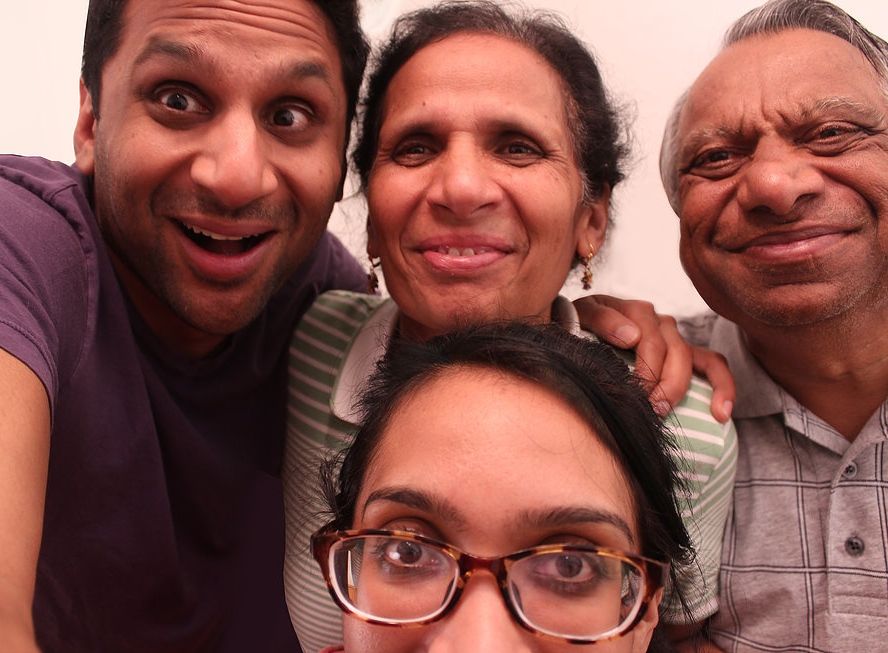 SAN FRANCISCO — Meet the Patels is a charming, real life romantic comedy about Ravi Patel, an Indian American actor/comedian who enters into a love triangle between the woman of his dreams — and his parents. Filmed by Ravi’s sister, Geeta, in what started as a family vacation video, this warm and funny film reveals how, for a Patel, love is truly a family affair.

Fresh out of a breakup with his secret girlfriend, who is white, and freaked out that he’s almost 30 and still single, Ravi goes on a family vacation to India with his head and heart spinning. He decides he’s willing to do whatever it takes to find love — but there’s a catch: in his family, everyone has the last name Patel. Patels marry other Patels. It’s not incest — it just means they are from the same 50-square mile radius in India. Struck with how overwhelmingly happy are the marriages of his Patel family and friends, Ravi plunges into the foolproof Patel matchmaking system and embarks on a worldwide search for the perfect American Patel woman.

A well-oiled machine, the Patel network is instantly alerted to Ravi’s availability through his legendary matchmaker mother and his jovial, advice-spouting father, both of whom expertly quarterback Ravi’s love life through a system that has brought happiness into the lives of all of Ravi’s cousins. Ravi and Geeta’s mother Champa and father Vasant decided to marry within ten minutes of meeting, have been wildly happy for 35 years and can’t wait for weddings and babies.

Over the course of a year, Ravi’s parents send him on a whirlwind of dates across the United States and Canada via the “biodating” system (in which resumes are circulated within the Patel universe), a chain of weddings, online matrimonial websites, and even the Patel Matrimonial Convention. During the process, Ravi can’t seem to shake his documentarian sister who follows him around, inserting commentary at every turn. Witty and brutally honest, Meet the Patels explores the questions with which we all struggle: What makes a great, lasting marriage? What is love? How do we find it? And even then, how do we keep it?

Ravi V. Patel (Director/Writer/Editor/Subject) made his directorial debut with Meet the Patels, which led to a writing/directing deal for a feature film adaptation for Fox Searchlight. As an actor, he is most recognized for his work on Scrubs, It’s Always Sunny in Philadelphia, Transformers, Powder Blue, The New Normal, and, most recently, the Fox series Grandfathered starring John Stamos. Ravi also serves as Co-CEO of This Bar Saves Lives, which he founded with actors Ryan Devlin, Todd Grinnell, Kristen Bell, Jimmy Kimmel, Emily Blunt, John Krasinski, Kunal Nayyar, Alyssa Milano, Susan Sarandon, and many others. TBSL gives a life-saving meal packet to a child in need for every fruit and nut bar sold. Ravi also co-manages an investment group that focuses primarily on health, wellness, and social enterprises.

Prior to joining the entertainment industry, Ravi was an investment banker and later founded the popular poker magazine All In. He graduated from the University of North Carolina with double majors in Economics and International Studies. In 2016, Ravi traveled as a guest of the U.S. State Department on a diplomatic film program to Egypt and Japan.

Geeta V. Patel (Director/Producer/Editor/Cinematographer) is known for her emotional, form-pushing, and nontraditional style that merges documentary and dramatic forms. Geeta and her brother Ravi directed Meet the Patels, which led to a writing/directing deal with Fox Searchlight for the feature film adaptation. She is also writer/director of the upcoming feature film Mouse, produced by Grant Hill (The Matrix, Tree of Life). Geeta made her directorial debut with the documentary war thriller, Project Kashmir, which led to directing fellowships at Sundance and Tribeca. She began her career as a writer’s assistant in TV and then served as associate screenwriter on feature films, including The Fast and the Furious and Blue Crush.

A graduate in Comparative Area Studies from Duke University, Geeta was inspired to enter storytelling by Anthony Minghella, whom she met while studying in Berlin. She has been a visiting artist in Belarus, Turkey, Egypt, Bosnia, and Japan through the U.S. State Department.