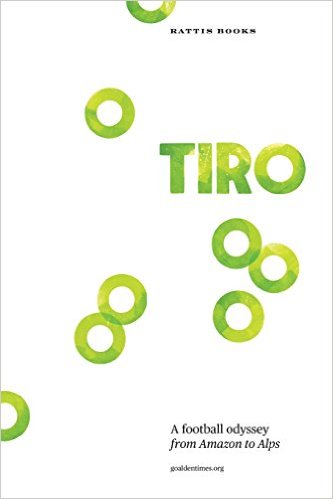 Chicago– As a sport, nothing rivals football. Cricket may generate great intensity among its followers but the game’s geographic spread and cultural underpinnings pale in comparison with football. Between Europe and South America, football has emerged as an extraordinary cultural, social and political force that lends itself naturally to sport literature.

London-based Rattis Books and publisher Arka Paul have brought together a compilation of 33 essays in the form of a remarkably inventive book titled “Tiro – A Football Odyssey from Amazon to Alps”. As the book explains, Tiro in Spanish means shot, kick, throw (in sports) and gunshot generally. What makes “Tiro” remarkable is its essay writers’ detailed understanding of the game in the larger contexts of the countries they are played in and followed with religion-like passion. Excerpts from an email interview with Paul.

Q: First, the obvious if somewhat amusing question. Is it by design or happenstance that all your authors are Bengali?
A: It is pure coincidence. The selection was based on the theme and overall scope of the book and from authors living across the three continents.

Q: That also leads to my second question — what explains the Bengali passion for football?
A: The history of Indian football provides a few clues. The popularity of association football in the 1880s was due to the efforts of people like Nagendra Prasad Sarbadhikary of Calcutta. In 1892, the Indian Football Association (IFA) was formed as a guiding body for Bengal/Indian football. The first Indian club to win the IFA Shield in 1911 against East Yorkshire Regiment was Mohun Bagan Athletic Club of Calcutta and it is said that the final drew an amazing 80,000-strong crowd. After that, Mohammedan Sporting became popular in the Calcutta League in the 1930s and produced quite a few gifted players. Then came the nationalistic, indigenous brand of “barefoot soccer” emerging from the Calcutta “Maidan”. In 1948, the first international match of the Indian team in the Olympics was led by Dr. T. Aoa with players like Ahmed Khan and Sailen Manna and was played and won barefoot. In a sense, Calcutta (and) Bengalis are intrinsically linked to the evolution of Indian football and its history.

Q: How do you explain the eclectic spread of the book?
A: In June and July this year, there was Copa América Centenario and Euro 2016. With this summer of football in mind, Tiro was edited as a collection of essays on European and Latin American football — some of them being published for the first time.

Q: How different are the cultural underpinnings of football in Europe and South America?
A: The football culture of these two continents are utterly diverse yet touches many common points. One appropriate example is the hooligan culture. There are distinctive differences between Balkan countries and Argentina or Colombia, for example, in terms of how the hooligan organisations operate, their purpose and political agendas. The celebrations, the anthems, the protests all have their own unique characteristics, yet they are united by a common passion for the game.

Q: Tell me how your authors chose the essay themes.
A: All the authors are regular contributors to the Goalden Times. “Tiro” is a culmination of their years of following, reading, travelling, writing and at times just stumbling upon curious anecdotes about the game which germinated their minds with ideas.

Q: Many football-playing nations have long histories of conflict. How has the sport helped relieve some of those pressures?
A: Sports, and football particularly, is a site of both bitter rivalries and unifying factors. You will find accounts of such rivalries in an essay exploring the rivalry between Argentina and Uruguay. Another often untold story captures the intriguing battle between two Portuguese giants to sign up the wonder boy from Mozambique — Eusebio.

Q: Do you think the ‘Beautiful Game’ has lived up to its potential in terms of helping resolve conflicts?
A: There are quite a few examples. The most recent instance is of Didier Drogba, who influenced a ceasefire in the Ivorian civil war. “Tiro” has celebrated a few such phenomena.

Q: Why do you think football has not made much headway in India?
A: Several studies and critical narratives have been written on this topic. A combination of various factors has held India back. Indian football has a long and rich heritage and once occupied the top position in Asian football. But it’s also hard to imagine the idiosyncrasies that existed. For example, during colonial times, Indians were not able to participate in the World Cups of 1930-38. Eminent football coach Amal Dutta has recounted “how the British authorities, afraid of the nationalist fervour triggered by Mohun Bagan’s IFA Shield victory in 1911… discouraged the formation of a representative team that might win laurels abroad”. Another peculiarity was the 50-minute match format. It was in the 1970s that this format — in domestic competitions — was changed to 90 minutes. It can be argued that Indian players naturally didn’t have the stamina required for foreign competitions. A notable example was in the 1956 Olympic semi-final against Yugoslavia. India was 1-1 till the 68th minute, and then went out-of-breath and conceded three goals in the last 20 minutes. It has also been attributed to the mindset of authorities who fail to appreciate the immense potential of the sport. Institutional bodies are still stuck on the idea of football as a pastime.

Q: Can you imagine a time when football might begin to rise as a sport rivalling cricket in India?
A: Studies suggest football demands seven qualities: skill, speed, strength, stamina, tactical appreciation, functional appreciation and reaction. The BCCI has set up several cricket academies to nurture young talents. But Indian football is yet to see any such meaningful venture from AIFF. If poor professionalism is rectified, football will start to rise again. (IANS)