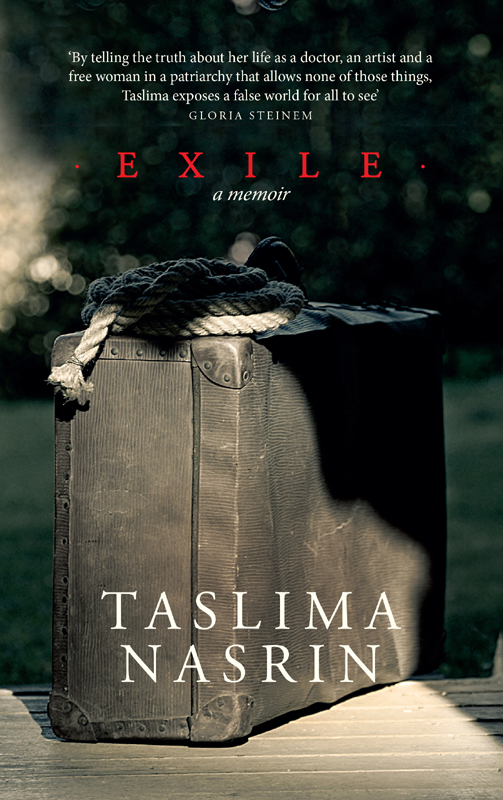 One of the most controversial literary figures of contemporary times, Taslima Nasrin has always been forthright in her opinions and thus the title of her latest memoir, “Exile”, is but a fitting synonym to a life lived under sustained duress.

This seventh memoir — a cumulative chronicle of her days in Kolkata and the circumstances under which she was, in her own words, “hurriedly shifted, first to Jaipur and then to Delhi, confined to an obscure safe house, and facing incessant pressure from senior officials and politicians to leave India” — is replete with dark imageries and repeated provocations.

Nasrin rose to global attention by the end of the 20th century owing to her essays and novels with feminist views and severe criticism of Islam. Her 1993 novel “Lajja” garnered severe criticism in Bangladesh. Nasrin escaped to Sweden in 1994 and spent the next 10 years in exile in Europe and America. Coming to India in 2004, she settled in Kolkata, where she found her second home — one that was closest to the surroundings that she had grown up in.

It is in this offering that Nasrin, perhaps for the first time, has come out to openly chronicle her struggles in India over a period of seven months. Armed with a fatwa from their religious ideologues, on November 22, 2007, a virulent mob demanded that Taslima Nasrin leave Kolkata immediately. This inextricable nexus of “petty political conspiracies, vote bank politics and minority appeasement” marked her last days in Kolkata.

The book narrates the horrors of a writer-in-exile, who despite having a permanent residence permit in the United States and Swedish citizenship, decided to settle down and live in Kolkata. Taking a dig at the then political establishment in West Bengal, Nasrin shockingly reveals that everything she was made to go through was a result of “vote bank politics”.

Nonetheless, Nasrin is now living in New Delhi. For her, there is happiness for being allowed to live in India, yet “an unmatchable sorrow” for living outside Kolkata. The memories of living in 7, Rawdon Street, whose doors were “forever open to everyone, including strangers”, are etched permanently in her memory. In six months, it seemed like she had been living there for almost a decade. “So many people, right, wrong, cunning, naive, have passed through my doors but I have never felt like judging any of them. Stupid and harmless, that is how I have always been,” she fondly recalls in her memoir.

Nasrin, during her “better days in Kolkata”, could simply walk out in plain clothes, “just a pair of flimsy slippers” on her feet, and shop off the pavement, buying things at a bargain. She could pick up a “stray kitten from Gariaghat” and bring it home with her. Nasrin regularly attended shows at theatres like Girish Mancha.

It was a simple, unadorned life that would suddenly transform into a glamorous one – “the crowds would spill over outside the stall at the (Kolkata) book fair and the police would have to be deployed to manage the admirers”.

Meanwhile, Kolkata also embraced the writer-in-exile with open arms. Her life, at that point of time, was synonymous with those who had spent decades living in the great city. “A Bengali newspaper in the morning, a Bengali magazine or a book in the afternoon, the evening adda in Bengali or a boisterous and noisy Bengali dinner at night” made her feel “as if I belonged to the city, that I was not from a different land”.

The offering chronicles her dark memories and questions her ouster from Kolkata but more than anything else, it is a fitting tribute to the charm associated with Kolkata, replete with all things Bengali — from buying fish in Gariahaat to reciting poetry in her favourite language. (IANS)