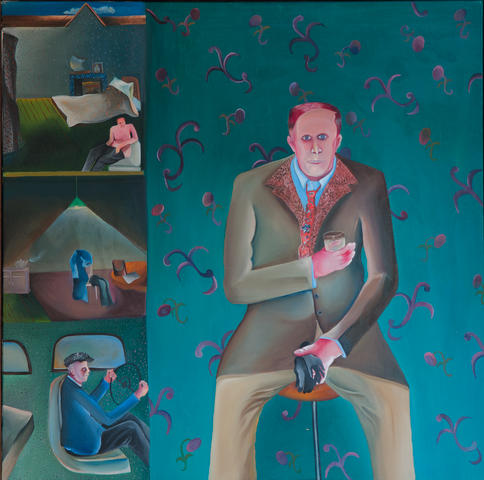 Amongst the artist’s most celebrated works, “Man in Pub” was executed during a trip to the UK in 1979. The piece is a prime example of the artist’s facility for presenting vulnerable intimacy with bold, colourful flair.

An accountant by day, artist by night, Khakhar was preoccupied with the plight of the ordinary man. Inspired by personal experience, Khakhar’s paintings are often confessional narratives. Many of these make reference to his sexuality, Khakhar was one of the first Indian public figures to come out as homosexual.

“Bhupen Khakhar, until recently largely unknown outside India, has since become internationally acclaimed. This touching yet humorous piece, British in its content and Indian in its execution, is a prime example of Bhupen’s narrative and colourist skill”, Tahmina Ghaffar, Bonhams Modern and Contemporary South Asian Art specialist, said in a statement.

Bonhams, founded in 1793, is one of the world’s largest auctioneers of fine art and antiques.

Syed Haider Raza’s “Paysage Nocturne”, a masterpiece of South Asian modernism, will also be on auction at Bonhams’ Modern and Contemporary South Asian Art sale in London. Recently discovered, the work is estimated at 30,000-50,000 pounds.

Artists and creators come together for Covid Fundraiser Week

I’ve always spoken out against every government: Orijit Sen