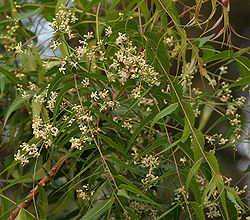 Singapore– Oral administration of a compound derived from neem — a medicinal plant native to the Indian sub-continent — can significantly reduce the size of prostate tumour by up to 70 per cent as well as suppress its spread by half, a study led by an Indian-origin scientist has found.

The study revealed that nimbolide — a bioactive terpenoid compound derived from neem plant — can significantly suppress cell invasion and migration of prostate cancer cells, suggesting its ability to reduce tumour metastasis or spread.

The findings showed that oral administration of nimbolide for 12 weeks can reduce the size of prostate cancer tumour by as much as 70 per cent and decreased its spread by about 50 per cent, without exhibiting any adverse effects.

Nimbolide directly targets glutathione reductase — an enzyme which is responsible for maintaining the antioxidant system that regulates the STAT3 gene in the body.

This activation of the STAT3 gene has been reported to contribute to prostate tumour growth and metastasis, explained the researchers.

“We have found that nimbolide can substantially inhibit STAT3 activation and thereby abrogating the growth and metastasis of prostate tumour,” Sethi added.

The results of the study were published in the journal Antioxidants & Redox Signaling. (IANS)

Vaping may up oral infections and inflammation risk

Exposure to alcohol ads can lead to teenage drinking

Half pint of beer a day can lead to longer life