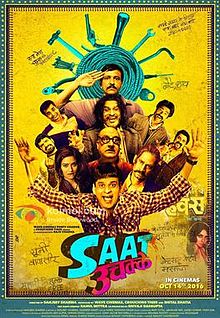 A cop and robbers story, “Saat Uchakkey” is a pretentiously creative film that offers lessons of life regarding hope, desire and fate.

The prologue begins with a scene in a mental hospital and co-relates the events with fables from the Panchatantra. Blended with abstract and reality and treated as a comedy, the film promises you an unusual cinema experience.

Set in the heart of old Delhi, the film revolves around seven good-for-nothings who want to become rich.

Pappi Jatwala (Manoj Bajpayee) is a failed entrepreneur dealing with antiques. After hearing an old lady in his neighbourhood rant about how the Diwan (Anupam Kher) has stolen and stacked her family treasures in his haveli, Pappi devises a plot to raid the Diwan’s home.

How he bands his team and they execute the heist, forms the crux of the drama.

The narrative, packed with philosophical lessons pouted in rustic lingo abounds with profanity, is entertaining, yet unsatisfying. The tale becomes doubly engaging due to the uninhibited language and performances of the cast. Every actor is natural and plays their part to perfection.

Manoj Bajpayee, with a fringe hair-cut and a buffoonish demeanour as Pappi, makes for an unusual leader of the gang. His clumsy act along with that of his team-mates is worth a watch. His sudden, turbaned transformation is theatrical and unconvincing though.

He is aptly supported by Nitin Bhasin as Hagu, Vipul Vig as Ajji, Aparshakti Khurrana as Khappe and Jatin Sharma as Babbe. They are all notably remarkable.

Aditi Sharma, the only girl in the gang, is simply striking and impressive as Sona — Pappi’s lively, pragmatic and determined love interest.

Vijay Raaz as Pappi’s reluctant ally Jaggi, Kay Kay Menon as police Sub-Inspector Tejpal and Anupam Kher as the blind Diwan pining for his dead wife, are impressive too. But they do not offer anything novel.

Annu Kapoor as the philosophy-pouting vagabond Bichhi in a vaguely chiselled character sketch, is imposing. But the abstractness of his character is what keeps him on the sidelines.

On the production front, with ace production and sound designs coupled with striking visuals, the film is well-packaged. The setting and the culture is captured to perfection by cinematographer John Jacob Payyapalli’s lens and the visuals are seamlessly layered by ace editor Shree Narayan Singh.

Overall, if you ignore the prologue and the denouement, “Saat Uchakkey” is a pleasant film. (IANS)