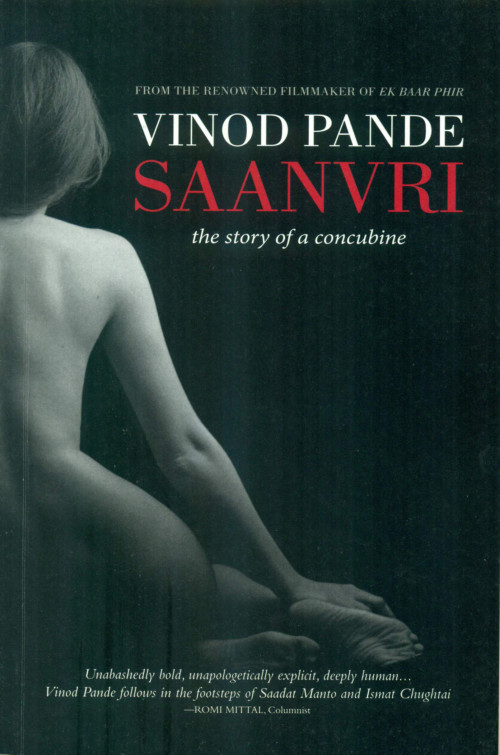 New Delhi– Shaken by the killing of Dalit midwife Bhanwari Devi in Rajasthan four years ago, filmmaker-author Vinod Pande, best known for the seminal “Ek Baar Phir”, said lack of funds prevented him from taking it to the big screen but eventually turned it into his second book, “Saanvri – the story of a concubine”.

“Saanvri” (Niyogi Books/pp 264/Rs 250) “is entirely an original work of fiction which draws inspiration from multitude of unfortunate incidents of human misery in a conflicted and still regressive society. Any similarity is merely coincidental and not at all judgemental of any specific occurrence,” Pande told IANS in an interview on his second work of fiction.

How then did the book come about?

“Creative people often get motivated by something that might be happening around them at any given point of time. I am no exception. A dramatic and highly disturbing situation that had occurred in Rajasthan some years ago stared me in the face for its human value in a society still struggling to clear its cobwebs.

“There was no way that I could have turned away from it. First I wanted to make a film on the subject, but wherewithal not materialising, I opted for the book first, which, in any event, gives one a greater freedom to let go with his creative juices,” explained the multifaceted Pande, who, along his journey in life, served as a civil servant with the British government, broadcast for the BBC and made several documentaries and ad-films.

It’s this thinking that gives “Saanvri” such a sweep: In a small North Indian town one night, a nurse disappears while visiting a patient. The police suspect abduction but there is no ransom demand. The CBI and police are at their wit’s end when the mysterious layers of the story begin to unfold through the reflections of those closest to the protagonist. What emerges is a moving saga of a young girl of the Nat tribe.

It’s a tale about decadence in the high realms of power; the story of a woman who learns the use the wanton carnality of men as a means of gratification and a weapon for ascendancy in a society that uses and abuses her. It is also about the three most important people in her life — all of who used her with impunity: The one she wed, the one she loved and the one she chose to manipulate with unbridled impudence.

This paved the way for her unique translation from a victim to an exploiter.

“Motivation for any creativity,” Pande explained, “does not necessarily mean copying the thing or the incident or the situation that may have spurred it. It could be operative on an inspirational level alone. From one single inspiration, hundred different plots or stories can be constructed, as often is the case. I emphatically state that it is not the ‘true story’ of Bhanwari Devi or any other,” added Pande, who is now working on his third book, “Destiny”.

This book “traverses far more complex and far more tantalising highs and lows of human relationships in terms of emotions, morality, passions and dilemmas of integrity”.

“Structured in the crucible of political machinations, it is at once a peephole view of the personal and private relationships of an imaginary legendary politician clashing with the societal morality as well as his travails as an iconic figure confronting the oppressive demands in his public domain,” Pande explained.

How did he transit from a filmmaker to an author?

“As they say, necessity is the mother of invention. In my case, it became a little more. It turned into an opportunity for reinventing; moving towards what I always secretly aspired for. I always used to tell myself that some day I shall author novels. In fact, I was already closet-writing another rather ambitious novel, ‘Beyond Frontiers’, which I have put on hold for the time being.

“Because, when the finances for making films dried up and even the TV opportunities became evasive, I had to discover newer outlets for expression as well as, if possible, options for livelihood. But for this, I had to strategically think of first going for easily achievable and more ‘popular’ plots. Thus, I opened my vista as an author with ‘Don’s Wife’ and now the second one,” Pande explained.

Any film projects in hand?

“I am presently concentrating on short films for our YouTube channel VPEOrg. We have recently completed and uploaded our first short film ‘Panaah’ which was also shown in the recently held Jagran Film Festival. Soon, I am going to begin shooting for a web-series ‘Office Affairs’ for our channel, which already has many of our films and video-blogs uploaded for free viewing,” Pande said.