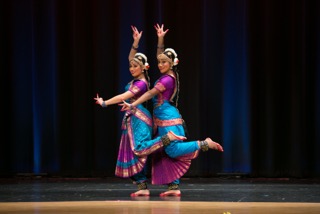 SHARON, MA–I always love to attend different festivals and cultural events. I think they are the backbone of our own existence. Bharatanatyam Rangapravesha is one of the debut performances, which shows significance of nurturing not only culture, but also completion of the formal training, hard work and dedication. Recently I travelled from Toronto to attend one of such performance – joint Arangetram of Shruti Das and Srimayi Chaturvedula, disciples of Guru Smt. Poornima Risbud, on September 17, 2016 at Sharon Middle School’s Auditorium. 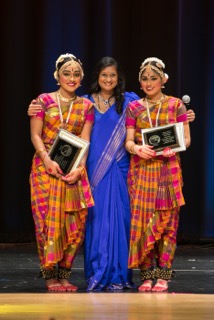 The Venue decoration was looked after with minute detail bringing out the splendour and glory of this dance form and its history. It created divinity, harmony and the traditional design set the tone for colourful and energetic performance. To witness this significant milestone, many of friends, and family travelled from different parts of the world.

Shruti Das and Srimayi Chaturvedula are the students of Rasarang School of Performing Arts from last several years and had been learning Bharatanatyam under the guidance of Guru Poornima Risbud. Having known Poornima, I was expecting a unique mix of classical and preppy recital and I was very happy that the guru and her disciples amazed me once again with brilliant performance.

What took me and 500+ audience was the remarkable performances of the two dancers, their ability to use complex Bharatanatyam steps smoothly and effectively and the coordination between the two. Guru Poornima’s Nattuvangam and her designing the sequences of the dance was indeed the highlight of the event. The accompanying artists – Sudev Warrier (vocal), K. S. Sudhaman (Mr’dangam), and Ramani Thiagarajan (flute) – brought dazzling flare to the event and brought the best out of the two dancers. A little dramatic lighting and a perfect sound and music created the right atmosphere. 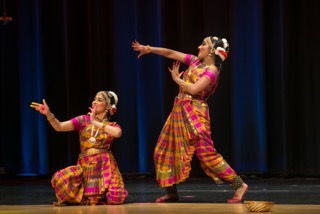 The program began sharp at 4pm with Pushpanjali. It is the first dance in a Bharatanatyam Recital, an invocatory dance, where the dancers pay obeisance to the lord of dance Nataraja, the guru, the musicians and the rasikas (audience). The duo performed effortlessly and set the tone for the evening. This was followed by Alarippu, a highly energetic piece focused on Nritta, which was set to Chatusra tala. Both dancers generated beauty through dynamic movements and specially the footwork.

The third item of the evening was Kanjadalayatakshi. It is an expressive item that greets the three devis- Laxshmi, Saraswati, and Paravati. Shruti’s and Srimayi’s command over the dance form was visible. They performed with every beat and took the audience breath away.

What followed later was Varnam and was a centerpiece of the performance. It was one of the detailed and complicated dance. It was a terrific combination of abhinaya, instance expression, and Nritta. The duo performed on the ‘Dashavatar Varnam’, which describes the ten incarnations of Lord Vishnu. During its short but effective narration by Shachi Risbud, herself an extra-ordinary Bharatanatyam and fusion dance artist, Shruti and Srimayi demonstrated each avatar to make it easier for the audience to understand. Guru Poorinma’s teachings were put to test and her disciples gracefully engaged the audience with their incredible and powerful presentation.

After a short intermission, the program continued with ‘Nagendra Haraya’  – a ‘Shivapanchakshari Stotram’ in Khanda Tala and Ragamalika raga. The composition describes the greatness of lord Shiva. Both the dancers were so convincing that they made the audience salute them with their brilliant performances. Every eye movements, harmonized and emphasized the body movements. They showcased the stamina and dancing abilities with grace. 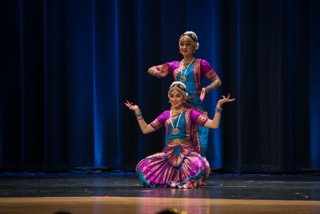 The next two pieces were solo performances. Shruti showcased her talent with ‘Eni Mahanandave’  a kannada song in which the dancer is astonished by wonderful sculptures Halebid and Belur, and imagines them coming to life. Based on Brindavani Saaranga raga and Aadi tala, Shruti emotes every possible emotion and was perfect with narrating her feelings with radiant dancing skills. Srimayi performed on ‘Madhura Nagarilo’, a Telugu song describing a young gopi’s visit to the town of Mathura. Srimayi was remarkable and impressive with her beautiful expressions and enactment of the gopi, as well as youthful Krishna. Both the solo items gave the dancers a chance to present their talent and both showed their incredible aptitude and command over conveying the meaning of the song to the audience.

The next piece was Thillana, a fast- paced and lively performance with majorly rhythmic composition. The name Thillana signifies expression of jubilation, vigor and ingenuity. The girls were able to showcase there teachings of Bharatanatyam– Three words ‘Bha’ – Bhavam meaning expression, ‘Ra’  Ragam meaning melody and ‘Ta’ – Thalam meaning Rhythm. 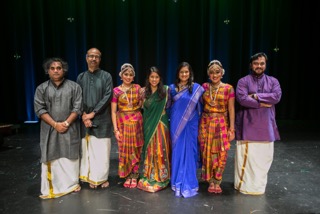 As Shruti and Srimayi were getting ready for the last performances, the musicians were requested to entertain the audience. The vibrant and riveting Jugalbandi between Shri K.S. Sudhaman on Mr’dangam and Shri Ramani Thiagarajan on Khanjira kept the audience on the edge of their seats. They were enthusiastic, and more importantly, very talented. The audience was cheering and clapping and enjoying the majestic instrumental music.

Next item was ‘Lallati Bhandar’, a Gondhal folk song from the state of Maharashtra. Gondhal is traditionally performed by Marathi people in devotional praise of the goddess Yellamma. Here comes Guru Poornima’s talent and experience where she can blend tradition with modern touch to dance. The performance was very energetic and the blend of Bharatanatyam with a Marathi folk dance was very interesting and unconventional. But this unusual dance made all the audience sway on their seats. Both the girls were magnificent, majestic and impressive with every movement, and expressions. This arangetram concluded with Mangalam, a piece that expresses the gratitude towards Lord Nataraj, the guru, the musicians and the audience for the completion of the Arangetram.

Shruti and Srimayi’s arangetram was a grant success. Both the girls had given their best performances and their dedication paid off. They have blossomed into a full-fledged artist. Here I would like to make special mention about the Artistic, fashionable but still traditional Costumes which were intrinsically embroidered with different religious motifs and designs in threads of gold and shimmering silk. The costumes were bright, and colourful that intensified the dances. The makeup and costume help provided by Mrs. Saritha Venkatesh and Mrs. Janaki Bhaskaran were perfect.

My Journey from Toronto to Boston to witness a beautiful and powerful performance was pleasing. Both the girls, Shruti and Srimayi had given very strong message with this achievement. Determination, Hard work and will power is what takes a person to the heights. I wish them all the success in the future and hopefully will be able to see them dancing, performing and continuing their passion for Bharatanatyam.

Gauri Narayan: A Passionate Performance at an Arangetram