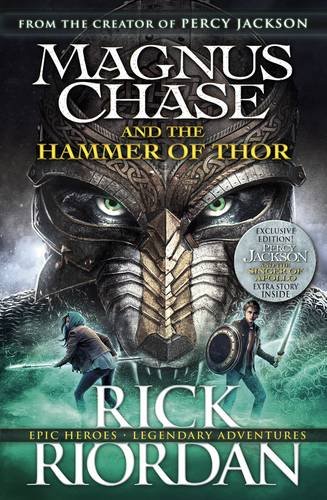 It seems a straightforward heroic quest (as if they can ever be), searching an ancient tomb for a stolen divine weapon. But your informant is killed before your eyes, the assassin warns you are heading into a trap, there is no end to complications and eventually, you find your mission – on which rests the world’s fate – might involve a forced and unsuitable marriage for one of your best friends.

Par for the course for what Boston-born Magnus Chase, son of Frey or the Norse god of summer, healing and renewal, has to do in his new existence as an eternal warrior of Odin, the supreme god. But can he trust an ostensible enemy who again offers advice and help, while avoiding playing into the real enemies’ hands, and complete his mission successfully?

And will Magnus also manage to solve complications in the lives of his friends, old and new, not to mention his own?

This is what we find out in the second Gods of Asgard novel, where Rick Riordan skillfully reinterprets the engrossing twists and turns of mythological lore with a most modern sensibility and settings, while entwining it with the glorious uncertainties of teenage life.

Among all the prominent traditions, Norse (like its noir) may be the gloomiest and menacing, for while other pantheons face challenges, the outcome is never in doubt, this is one whose gods know most will not survive the inevitable, cataclysmic battle of Ragnarok (or Gotterdammerung, the more famous German term – courtesy Wagner) when the world will be destroyed. (It will be reborn and repeopled – but with a new set of gods).

But Riordan, who has been termed the “storyteller of the gods” for the multiple ancient pantheons – Greek, Roman and Egyptian – he has brought to life across five cycles, is right up to the task here too.

Not only does he introduce us to this sombre world (or worlds – nine of them) – of which we only usually know about Thor the Thunder God (thanks to the comic and movies), the Valkyries, and its reflection in the works of J.R.R. Tolkien – and its other inhabitants, but uses the ancient myths to provide an unforgettable and incisive view of modern life, and its problems.

Riordan’s intricately-plotted, but picturesque account is enlivened by irreverence only teenagers are capable of, while artfully satirising modern day fads that only teenagers are not only guilty of in the present (this includes but is not confined to selfies, being glued to TV, rock music, fashion trends and accessories), but also raises questions of choice (moral and otherwise), identity (including gender), parental expectations, costs and responsibilities of knowledge and loyalty – to family or friends, even when they may not be on the right track.

And multiculturalism, diversity and acceptance are a major motif for Riordan as always.

The author (who began the Percy Jackson series after retelling the old Greek myths to his dyslexic son) has focused on mental disabilities, homelessness, ethnic inclusiveness, and even homosexuality, in his earlier works, has a hijab-wearing Arab teenager among the principal protagonists.

Samira Al-Abbas remains a devout Muslim despite her exacting work as a Valkyrie – and she herself points out, her situation is unique but not incongruous, due to the well-attested historic links between the Vikings and the Arabs (Remember Michael Crichton’s “Eaters of the Dead?”)

The second in the series, (which is likely to be a trilogy like Riordan’s Carter series about Egyptian demigods, rather than the five-volume Percy Jackson series), this can be read on its own too, though reading “The Sword of Summer” (2015) will make this more fulfilling.

Riordan also ties it in with his earlier works – Annabeth Chase, daughter of Greek wisdom goddess Athena and major protagonist of the Percy Jackson series, is a cousin of Magnus and makes an appearance in both installments so far, while seeming set for a more active role in the next one.

And while Percy Jackson (or Harry Potter or aficionados of magical fantasy) fans will enjoy this, a bonus Percy story in this volume will be an added allurement. (IANS)