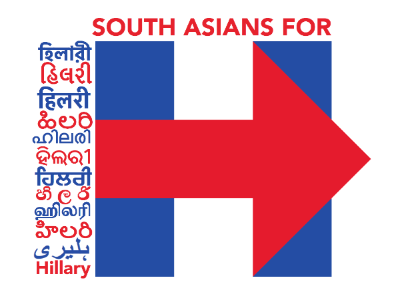 NEW YORK, NY — In a speech billed as a major address on his immigration policies in Phoenix on Wednesday,  Donald Trump once again demonstrated why he is unfit to be President of the United States,  South Asians for Hillary said in a statement.

While offering no substantive policies or ideas on immigration, Trump continued to espouse his rhetoric against immigrants in which he called them rapists, drug dealers and criminals, the statement said.

“We know from personal experiences with our own families, relatives and friends that Trump’s version of immigrants is untrue,” said South Asians for Hillary (SAHILL) National Co-chair Neha Dewan. “The South Asian community came to America for a better life, and in this pursuit have become a productive community socially and economically.”

Trump is setting a dangerous tone with his immigration stance, one that is generally unproductive, instills hatred and distrust amongst the public and further diminishes our nation’s standing in the international community, the statement said.  His plans include sending “deportation forces” to schools, workplaces and homes to deport more than 16 million people, revoke U.S. citizenship from 4 million American citizens born to undocumented parents and to build a giant concrete wall on the border of Mexico that would cost $25 billion.

Even Trump’s meeting with Mexican President Pena Nieto proved embarrassing, with President Nieto accusing Trump of lying about their conversation on building a wall and having Mexico pay for it.

“It’s highly concerning that Mr. Trump would waste his time on such destructive topics, such building a multi-billion wall or deporting American citizens,” said SAHILL National Co-chair Rajan Trivedi. “It would be more constructive if we can focus on issues that truly affect our communities, such as addressing the country’s H-1B visa backlog to allow more skilled workers to further stimulate our economy or reuniting families through family visas.”

The South Asian community will be deeply impacted by America’s future policies towards immigrants and their families.  The majority of South Asians in America are immigrants.  South Asians represent both one of the fastest growing undocumented communities in the U.S., as well as one of the largest groups of immigrants to obtain naturalized U.S. citizenship, the statement said.