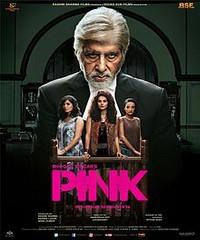 Mumbai– After a tepid response on its opening day in Indian theatres, megastar Amitabh Bachchan-starrer “Pink”, a courtroom drama that shines the spotlight upon issues of stereotype faced by women in the society, is garnering eyeballs galore — courtesy positive reviews about the power-packed performances and its socially relevant premise.

The film has collected Rs 21.51 crore in its opening weekend, according to industry experts.

On the Saturday and Sunday which followed the film’s release, the collections saw a promising hike — much in sync with trade expert Komal Nahta’s conjecture that after a “poor opening”, collections “won’t just pick up in multiplexes, they will shoot up” for “Pink”.

“Starting on a tepid note on Friday morning, the gradual growth in business of ‘Pink’ is simply phenomenal. Expected to be strong on weekdays too,” trade guru Taran Adarsh posted on Twitter on Monday.

On Friday, it made Rs 4.32 crore, on Saturday Rs 7.65 crore, and on Sunday, the movie managed a collection of Rs 9.54 crore, registering an upward trend and a total collection of Rs 21.51 crore, said Adarsh.

He rated the India business of the film as “excellent”.

The film features Amitabh as a lawyer, who fights a case of sexual assault involving three girls and a boy who belongs to an influential family.

A strong and meaningful message that the film spreads out is that no matter how a woman dresses, what she does or what she thinks, when she says no to sexual advances, it is a definite no.

“Pink” has been unanimously lauded by critics, members of the film fraternity and the audience for being creativity and narration at its best. It is supported by overwhelming performances by all actors to convey the complex story and realities of culturally confused society subtly but effectively.

Delhi-based distributor Joginder Mahajan told IANS: “‘Pink’ is doing strong business and has witnessed a good hike over the weekend. The film will definitely remain strong during weekdays because it has been appreciated by all.”

Multiplex chain Cinepolis India has even increased the number of shows for the movie.

“The film started really low on Friday morning, but from evening onwards, it picked up really well. We have increased our capacity and are also re-balancing the movies. We have increased shows for the film looking at the hike it has witnessed. After a good weekend, now we are looking forward to a strong week for the film,” Devang Sampat, Director – Strategy Initiative, Cinepolis India, told IANS.

Another film that hit the screens on September 16 was Emraan Hashmi’s “Raaz Reboot” — the fourth installment in the popular “Raaz” franchise.

Despite being in competition with “Pink”, “Raaz Reboot” – directed by Vikram Bhatt – has managed to attract footfalls at cinemas. The horror film has collected Rs 18.09 crore in three days.

However, if industry experts are to be believed, “Pink” will have an upper hand over “Raaz Reboot” because of the positive word of mouth.

“‘Raaz Reboot’ will witness a downfall in its earning because of the negative reviews it has received. Expectations are big from ‘Pink’ in the coming days,” Mahajan said.