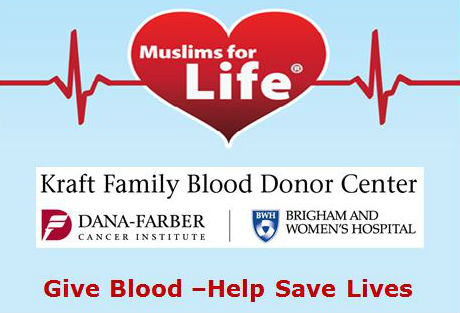 The Boston Chapter has invited all community members to donate. This life-saving campaign hopes to collect 10,000 pints of blood nationally to help save as many as 30,000 lives, the Boston chapter said in a statement.

In 2011, memorializing the 10th anniversary of the tragic events of 9/11, the Ahmadiyya Muslim Community USA launched this campaign with the aim to collect 10,000 pints of blood across America in order to help save more than 30,000 lives. The campaign ran in over 200 locations and resulted in 11,803 pints being collected that year. To date, “Muslims for Life” has collected nearly 40,000 pints of blood to help save well over 100,000 lives, the statement said.

The Ahmadiyya Muslim Community is the only Islamic organization to believe that the long- awaited messiah has come in the person of Mirza Ghulam Ahmad of Qadian, India (1835-1908). Ahmad claimed to be the metaphorical second coming of Jesus of Nazareth and the divine guide whose advent was foretold by the Prophet of Islam, Muhammad. The Community believes that God sent Ahmad, like Jesus, to end religious wars, condemn bloodshed and reinstitute morality, justice and peace. Ahmad’s advent has brought about an unprecedented era of Islamic revival and moderation. He divested Muslims of fanatical beliefs and practices by vigorously championing Islam’s true and essential teachings, according to the statement.