Jammu/Srinagar– The heightened tensions between India and Pakistan in the aftermath of the Uri attack have generated an intense debate in Jammu and Kashmir’s public and political circles — and everyone believes that a military solution is not the answer to their woes.

Indeed, the hawkish approach to settle issues between India and Pakistan has, in the past, brought more death and destruction to the lives of the people.

“Tensions between India and Pakistan have cost us lives since 1947. Our lives and livelihood have suffered immensely in the 1947, 1965 and 1971 (wars with Pakistan),” said Bodhraj, 57, a resident of the Akhnoor sector of the international border in Jammu district. 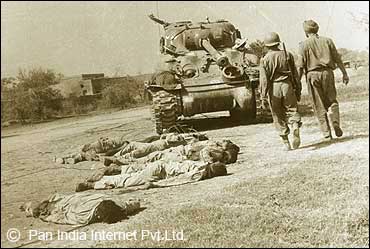 “Even in times of peace, we fire shells, they fire shells and these rain on our homes and on the homes of those living on the Pakistani side,” he lamented.

The fears voiced by Bodhraj are also echoed by others living close to the Line of Control (LoC) in Poonch and Rajouri districts of the Jammu region.

“Life has always been hell for us. You are talking of an impending or possible war between India and Pakistan? Please tell me when were these countries ever at peace with each other,” asked a disgusted Sarwar Hussain, 76, of Rajouri district.

Education of children, agricultural operations, grazing of cattle and even venturing out of homes become luxuries the border residents cannot afford during skirmishes and conflicts between India and Pakistan.

“The scars of the 1999 Kargil conflict are still fresh. Shells would fall right and left in our town and we had to leave for safer places, leaving behind all our properties and belongings,” said Iqbal, 61, a resident of Kargil town.

People in the Kashmir Valley might not be in the direct line of fire if hostilities break out between India and Pakistan, but they are more concerned because it is the over-26-year-long insurgency in the valley that plagues relations between the two countries.

“Newsrooms of TV channels have already become war rooms. I am sure if the leaders of India and Pakistan listen to what these channels say and propagate, the two countries will have to go to war twice every day,” said Muzaffar Ahmad, 58, a college principal.

Interestingly, while people seriously debate the fallout of a major armed conflict between India and Pakistan, they hope and believe neither country can afford a war since both have nuclear weapons.

“Times have changed. We are in 2016 and this is neither 1947, nor 1965, nor 1971. Arguments that use of a nuclear warhead is only a blackmail are essentially flawed. If the integrity of either India or Pakistan is challenged through full-fledged armed aggression, nobody can say with certainty that the bomb would not be used,” said Khwaja Nisar Hussain, 65, a retired chief engineer in Srinagar.

“War is basically a state of madness and if you expect sanity and better sense to prevail during madness then you are expecting too much,” he added.

What has been adding to the unease over the war hysteria is the already surcharged atmosphere in the valley, where 87 civilians have died in the ongoing unrest.

“TV news channel debates are the main culprit. Sometimes a retired general says an India-Pakistan conflict has already been ‘war-gamed’ in the army’s operational headquarters and the outcome is a foregone conclusion,” said Riyaz Ahmad, 42, a resident of Srinagar’s old city.

“Other channels want surgical strikes and still others demand encouraging strife and uprisings in Pakistan. This is what sends a chill down a Kashmiri’s spine,” he added.

Expecting that war would solve matters seems preposterous to most locals. “Wars create issues and do not resolve them, especially if these occur between nations militarily equipped to destroy each other,” said Shakeel Ahmad, 45, a political science teacher in one of valley’s colleges.

“An India-Pakistan war in 2016 would not be a war between a country far superior in military strength and a country far inferior. Modern wars are not about numbers, but about technology and striking capacity.

“For God’s sake, don’t ever talk about war. Let us pray for peace and sanity in both Delhi and Islamabad. Anybody advocating war as a solution is voicing anger and frustration whose result would only be destruction and nothing else,” Ahmad added.