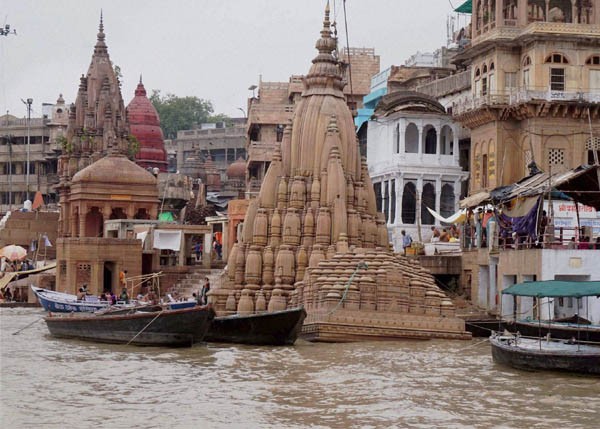 Varanasi– The Ganga was in spate and the neighbourhoods on its banks in this soulful but chaotic city deluged. And the doms, who cremate the dead to earn their living, are also submerged in gloom — and wish for intervention, or a little sympathy, from their local MP: Prime Minister Narendra Modi.

On a recent rainy day, a boatman was ferrying some people to safer places. Many of them had a wish: Prime Minister Modi, elected to the Lok Sabha from here, should visit at least once to see their plight.

Somnath Rambabu, a dom at the Harishchandra ghat crematorium, was visibly disappointed and wondered why Modi, who registered a handsome victory here in the 2014 election, has still not visited to understand the suffering of his constituency.

“Modiji hasn’t visited even once. At least, he should have come to see us. If he had come, we would have been happy that our leader cares. The difficult phase will pass. One who cares for his constituency will definitely come to visit his people. Only time will prove it,” Rambabu told IANS.

At the Assi ghat, Suraj, a boatman, said he has suffered because the government has banned boat rides for tourists amid rising water levels. He was now earning his living by ferrying flood victims. But not everyone pays him for his services. Now he makes about Rs 100 per day; earlier it was not less than Rs 500.

As he carefully rowed his boat over the gushing Ganga, he complained how the local administration was also indifferent to their plight.

“The administration has barred us from ferrying tourists for two months, till the water level recedes to normal. Now, we help the affected people. Those who can pay, do; and those who can’t… they don’t,” he said.

Around 200 villages have been affected in Varanasi — also known as the land of Shiva — due to the floods. According to the residents, around five million food packets were being distributed each day to the affected people. But they say it is not enough.

“The situation has been like this for nearly two weeks. Don’t know how long it will persist. The water level will remain the same for at least 10-15 days more,” Suraj said.

Raju, a laundryman, was ironing some clothes at a short distance from Assi ghat. He said he lives at Nagwa, some five kilometres from Assi. He had come to the ghat to work on a boat for his livelihood after his house and shop were inundated.

He said he used to earn Rs 300 to 350 more per day than what he’s earning now, before he “lost everything”.

The dom community is believed to have suffered the worst. Hindus believe that those cremated at Manikarnika and Harishchandra ghats of Varanasi will be liberated from the endless cycle of birth and death by what is known as “moksha” or salvation.

Back in Harishchandra ghat, the dead are now being cremated in a small lane. But the number has decreased sharply, to 20 or 25 bodies a day from a normal of nearly 100.

“The ghat is flooded. There is a space crunch. Very few bodies are being brought for cremation. Because of the floods, people cremate the dead in their villages,” said Rambabu.

Some 400 families of the community live near the Harishchandra ghat.

About two km away at the Manikarnika ghat, bodies were being transported in boats. As the flood water continued surging, the doms cremated the dead on the terrace of a dilapidated building as a makeshift arrangement.

Earlier, they used to receive some 250-300 bodies every day at this ghat. But now the number is down to just 50.

Hari Prasad Chaudhury was busy at a pyre in the dead of a night. “Have you brought a body to be cremated,” he asked hopefully. “I have been working here for 18 years. I do night duties. We all are suffering because of the floods. We are running losses,” he said.

Jitendra Kumar, who sells wood for the pyres at Manikarnika, had a similar story to share. Cremation of a body costs around Rs 4,500 to 5,200. It requires 3-4 quintals of firewood. Each quintal costs around Rs 1,000.

Kumar said they usually “received 200-300 bodies per day”. “Because of floods, there is no means of transportation to come here,” he said.

But despite the odds, this holy city continues to live.

At the Dashashwamedh ghat, known for its Ganga aarti, the performance has been shifted to the terrace of a nearby building. Despite floods, tourists, mostly foreigners, throng the place to watch the show.

“The aarti will go on. Whether the ghat is inundated or not, this aarti will not stop,” said Vinod Upadhyaya, a priest at the Kashi Vishwanath temple.

Varanasi is down, but certainly not out. (IANS)