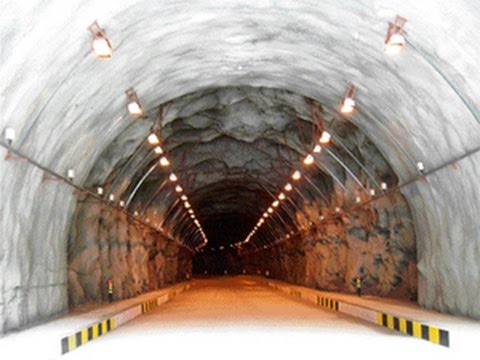 Manali– The excavation of a tunnel under the Rohtang Pass in Himachal Pradesh, one of the country’s strategically most important infrastructure projects, has hit another geological surprise that has slowed the project, an official said.

This time, the challenge is posed by a “weak strata” that is hampering the rock cutting to make way for the 8.8-km horseshoe shaped tunnel, an engineering marvel that will ensure all-weather connectivity to the landlocked Lahaul Valley from this Himachal Pradesh tourist resort.

Weak rock strata is an important factor in mining or tunnelling as it hampers mechanised and rapid mining/tunnelling techniques.

“For the past 10 days we have been encountering the weak strata with high overburden on the south portal (towards Manali) side. This is hampering further excavation,” an official of the Border Roads Organisation (BRO), which is involved in its construction, told IANS.

He said the situation worsened three-four days back as the boring machines became ineffective. “For the time being we have slowed down the excavation.”

“We are taking mechanical measures as the rock cover above the tunnel is very high and the existing strata are under stress. If such conditions continue, it will definitely delay further excavation,” added the official.

Geologists say because of loose strata and high rock cover in the Himalayas, the boring machines are not effective.

A similar problem exists in the tunnel construction of the 800-MW Parbati Stage II hydropower project in Kullu district which is being executed by the National Hydroelectric Power Corporation (NHPC), says a geologist.

The BRO, a wing of the defence ministry, aims to open the Rohtang tunnel, which was earlier scheduled to be completed by 2015, for traffic in 2019.

Over 350 men and more than a dozen Indian and European engineers have been working day and night to excavate the tunnel on both sides, located at altitudes ranging between 3,053 and 3,080 metres.

The project is being executed by the BRO in collaboration with Strabag-Afcons, a 60:40 joint venture between Strabag SE of Austria and India’s Afcons Infrastructure Ltd.

Close to seven kilometres of the Rohtang tunnel have been dug since work commenced in November 2011 and the remaining 1.8 km are aimed to be excavated by June next year, said the BRO.

Earlier, a geological surprise in the form of a glacial-fed Seri rivulet had sprung up in 2012 during work in the tunnel below the 3,978-m Rohtang Pass.

The 600-metre highly fragile strata, also on the south portal, had slowed down its construction for almost three years.

The north portal of the tunnel that lies towards the Lahaul Valley is encountering fewer geological surprises, say BRO officials.

But more than four months in a year the excavation towards the north portal remains suspended owing to heavy snowfall. It’s also prone to flash floods and snow avalanches.

However, work on the south portal, 25 km from Manali, continues even during winter.

Once ready, the Rohtang tunnel will be a boon for the cold deserts of Lahaul Valley, where over 20,000 people remain cut off from the rest of India in winter owing to the closure of the Rohtang Pass, a major attraction for both domestic and foreign tourists and located 52 km from Manali.

Besides reducing road distance by approximately 46 km and saving travel time of about four hours, the tunnel will open up new vistas of trade and tourism and generate jobs for the locals.

The tunnel will provide ample room for two-way traffic and is designed to cater to a maximum vehicular speed of 80 km an hour.