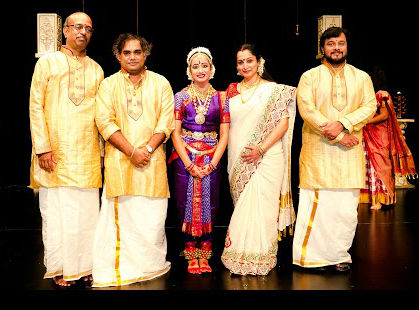 By Kedar Risbud and Shreyas Risbud

I have seen only a handful of dancers presenting the beautiful choreographies exactly as they were taught by their Guru. Madhumita Nambiar’s Bharatanatyam Arangetram on Saturday, August 06, 2016 was no exception to this. 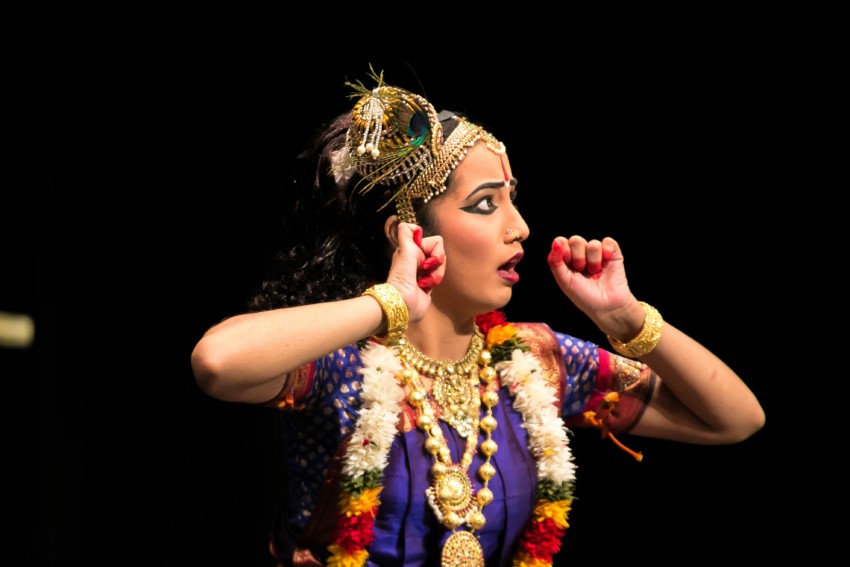 Madhumita began her performance with Pushpanjali in Ragam Saraswathi, a composition by Sri. Madurai Muralidharan. The choreography was unique as Madhumita enacted each accompanying art form before taking blessings from the respective artist. The audience was amazed at the confidence and finesse with which this young dancer spanned the entire stage. This item was followed by ‘Anandnarthana Ganapathim…’ a composition in Ragam Nattai by Sri. Venkata Subbaiah in praise of Ganesha. Madhumita’s understanding of various rhythmic patterns in this energetic dance was evident with her precise footwork that was always in tune with the syllables being played on the Mridangam.

‘Anjaneya Kauthuvam’ composed by Sri. Madurai Muralidharan in Ragam Pantuvarali was another delight. This hymn in praise of Hanuman, an ardent devotee of Rama, began with Nattuvangam that accompanied Madhumita enacting different poses of Hanuman, including a flying Hanuman. At every chant of ‘Jay Maruti, Jay Maruti…’, she brought Maruti – another name for Hanuman – to the stage expressing the monkey god’s devotion, strength, and even anger. This choreography superbly intertwined different stories and episodes related to Hanuman.

The Varnam, which is the most elaborate item in an Arangetram recital, followed ‘Anjaneya Kauthuvam’. Composed by Kalamandalam Latha and Sri. Sudev Warrier in Ragam Mishra Shivaranjani, this Varnam was in praise of Shiva, the deity of dance. Madhumita enacted different stories related to Shiva. In the story of ‘Gangavataranam’ (descent of river Ganga to the earth), Madhumita brought out the sadness of Shiva’s devotee King Bhagirath, Ganga’s aversion towards leaving her heavenly abode, and the anger of Shiva. The next story portrayed Parvati’s fervor to espouse Shiva.

Guru Sapna Krishnan included humor in this choreography when Shiva disguises in front of Parvati as a frail, old man and mocks at himself. Madhumita brought out these amusing moments along with expressing Parvati’s determination, and her blushing when Shiva finally appears as himself. Madhumita’s enactment of Shiva protecting his devotee Markandeya from Yama’s noose of death was particularly hair-raising. Within moments of each other, Madhumita showed Markendeya’s fear, Yama’s cruelty, and Shiva’s fierceness. The story of demon Gajasura’s destruction was an equally forceful presentation of Shiva’s courage. Finally, in the episode of churning of the ocean (Samudra Manthan) that brought out Halahala, the most vicious venom of the universe, Madhumita depicted Shiva storing the poison in his throat to save the universe. This Varnam combined the Navarasas (nine emotions) in presenting different legends of Shiva.

The second half of the recital was replete with bhajans in praise of different gods and goddesses of the Hindu belief. ‘Gopalaka Pahimam’, a beautiful composition by Maharaja Swathi Thirunal, narrated different stories in the life of Krishna. ‘Om Greem Hreem Shreem…’, a composition in Ragamalika was in praise of the female forms of divinity – powerful Durga, fierce Kali, and humanity’s guardian Annapoorneshwari. In the form of Ardhanareeshwara – half woman and half man – it also depicted the world’s duality in unity. Madhumita did full justice to the intricate jathis in different rhythmic cycles (Taalamalika) of the accompanying song. Saint Purandarasa’s Kannada composition ‘Gummana Kareyadire…’ was another item in which Madhumita brought to the stage prankster Krishna, the heartthrob of the Gopis (cow herding girls), who empowered and defeated venomous serpent Kaliya. Madhumita’s sister Nilanjana joining at the end of this item as Yashoda was a nice twist.

The famous Thillana ‘Tham Tha Naam…’ in Ragam Bhoopalam composed by Padma Vibhushan Dr. M. Balamuralikrishna was the final item of Madhumita’s Arangetram. In praise of Padmanabhaswami, this Thillana included a variety of rhythmic compositions with a musical dialogue among the dancer, the Mridangam, and the Nattuvangam. The Arangetram ended with a prayer in praise of god Ayyappa.

The arduous training that Guru Sapna Krishnan imparts on each of her students was quite evident throughout the entire evening. Madhumita was as energetic until this last item as she was at the beginning of the recital. Sudevji’s rich and deep voice spanning more than three octaves with ease made the lyrics of each song come to life. With his mellifluous flute Sri. Ramani Thiagarajan was able to produce sounds of conch, too. Thiagarajan also displayed his mastery on Khanjira during his Jugalbandi with Sri. K. S. Sudhaman’s Mridangam. Furthermore, it was pleasant to hear him play violin during his accompaniment of Nilanjana Nambiar’s vocal recital. With his vibrant fingers producing a plethora of beats on Mridangam, Sudhaman frequently involved the audience throughout the course of his phenomenal Mridangam exhibition. The Master of Ceremony Smt. Anitha Shivaram effectively narrated each item for the audience. The artists behind the stage; Ms. Niveda Baskaran, herself an extraordinary Bharatanatyam dancer, and Smt. Janaki Baskaran maintained Madhumita’s fresh appearance with beautiful make-up.

This Arangetram truly tested Madhumita’s skills in all the three aspects of Bharatanatyam – Nritta, Nritya, and Natya. Madhumita has really made the Nambiar family, especially her Guru and mother Sapna Krishnan, more proud.