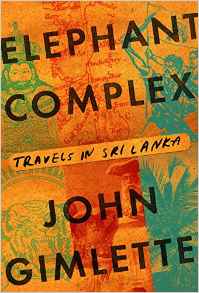 Sri Lanka has to be the most beautiful country I have ever seen, says John Gimlette, an accomplished travel writer who journeys to the island nation at the end of a long and brutal civil war. Anyone who has seen the country will more than agree. Marco Polo too felt it was the world’s prettiest island. And an Englishman wrote in 1803 that Sri Lanka deserves the name Paradise. But as John discovered, there was as much blood as there was beauty.

It takes skills to write about this beautiful landscape without getting too much enmeshed in the blood and gore and a politics of hateful divisions, of class, ethnicity and religion. Although most checkpoints had been rolled away and the colour was gradually seeping back to Colombo’s Fort area when John made his way, he could feel a lingering tension beneath the city’s jollity. Why not? Between 1983 and 2009, when the Tamil Tigers fought and lost their war, explosions became part of Colombo’s routine, a sort of anti-landscape in which hundreds were killed.

Colombo was aware of the rest of the island but was never quite sure where it was. People John came across knew their ancestral village, of course, but often that was all. They’d swear they lived in the most beautiful country in the world but few had ever seen it. Decades of language politics and war had neatly divided the island into a postcard beauty Sinhalese nation and a battle scarred and now wounded Tamil nation.

John takes readers leisurely through a country where the people – read Sinhalese — have one of the highest suicide rates in the world and yet appear also the happiest. War or no war, this is one country where more people die of snakebites than anywhere else in the world. John plunges into the Buddhist mysteries of Polonaurwa, Anuradhapura and Sigiriya, cities whose discoveries would affect the Sinhalese in a way no one had predicted. The author also meets the Veddas, Sri Lanka’s original inhabitants, and goes on to other exotic spots including Kataragama, a pilgrimage centre for both Tamils and Sinhalese, and Ngombo, where thousands of beach boys serve women alone.

Much before the horrors of the LTTE war consumed Sri Lanka, a leftwing Sinhalese group, the JVP carried out an insurgency that was brutally crushed. That was in 1989-90 when anybody could disappear, and between 10,000 and 15,000 people did, mostly boys in their teens. “Sri Lanka has never been the same from that moment on. It was the beginning of the great amnesia, a time when whole sections of society could vanish without a single memorial, prosecution or inquiry.”

In just one five-year period of LTTE war, Sri Lanka reportedly lost more people than they ever did in Nicaragua and El Salvador. The LTTE promised Singapore but its fiefdom, before it withered away, looked more like Eritrea, whose kids grew up knowing the difference between incoming and outgoing fire but without seeing a train or computer. By the time the war ended, leaving tens of thousands dead, a third of all schoolchildren in the war zones had been taken away by the Tigers, their anguished parents often hiding them in culverts and sewers to prevent abduction.

When John reaches Kilinochchi, the former LTTE capital in the island’s north, the sheer volume of men and machines is strangely overwhelming, like some great invasion that had never passed on. “If this war had been about hearts and minds, it wasn’t any longer.” And as it often happens, the victor went on to rewrite his enemy’s story, to belittle his motives, to daub his temples and to sweep away his graves.

Brutality never wins. So John meets a former Navy officer who saw such horror during the conflict that he now teaches people how to survive. A small LTTE “Jony” mine cost only $3 to make but $1,000 to remove it after the war — and $10,000 to patch up each of its victims. No wonder, almost three quarters of those maimed in Sri Lanka had nothing to do with the war.

The fighting cost the country $200 billion, lasted four times as long as World War II, yet there was still so much unresolved. Like the navy officer, a former LTTE combatant whose father helped him to flee Sri Lanka, says: “I never want to fight again. I have lost everything. I never want to see another T-56. I am finished.”

To John, it looks like everyone is busy trying to forget the past. But this is easier said than done. So Sri Lanka exists – with all visible signs of modernity along with cars that have never stopped plying since the 1950s: the Hillmans, Austin Cambridge and Morris Oxford. (IANS)