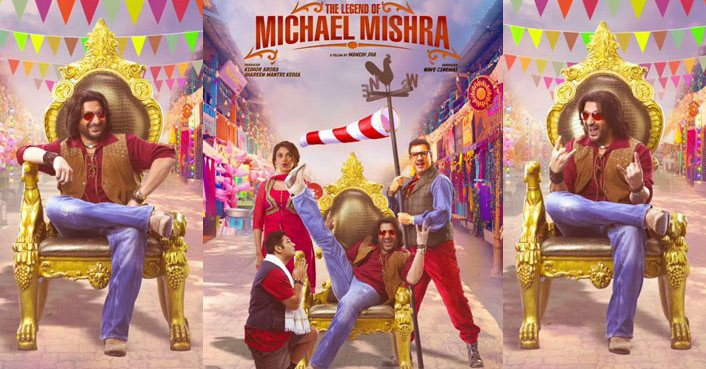 Chandigarh–The Punjab government on Thursday announced a ban on the screening of comedy film “The Legend of Michael Mishra”.

“The Punjab government has suspended the exhibition of the film with immediate effect for two months and during such suspension, it shall be deemed to be uncertified film in the state,” a spokesman of the state government said.

He said the decision was taken “keeping in view the prevailing strong resentment among the Valmiki community about some objectionable references to Maharishi Valmiki”.

“The decision was aimed at keeping intact the hard earned peace and social harmony in the state as the screening of this film may invite massive protests,” the spokesman added.

SRK hooked onto ‘The Night Of’

Mumbai– Superstar Shah Rukh Khan says he is hooked onto the gripping storyline of international TV series “The Night Of”.

He likes to watch it while working out.

“I put my iPad here (on the cycling equipment) and watch ‘The Night Of’ which is currently my favourite, so that I can pass off one hour,” Shah Rukh said in an interaction for live video streaming and broadcasting destination #fame.

“The Night Of” is a series based on events which follow a murder case. The series is available in India on the free live streaming app, Hotstar.

My father happy with my work: Tiger Shroff

Actor Tiger Shroff says his father Jackie Shroff is happy with the kind of work he is doing in the Hindi film industry.

Tiger forayed into Bollywood with “Heropanti” in 2014, and also did “Baaghi”, which will find its way onto small screen on August 15 on Zee Cinema channel.

“My father really likes it when someone comes up to him and says ‘Arey Whistle Baja ke Daddy’ or asks him where am I. He is extremely happy with the kind of work that I have done so far,” Tiger said in a statement.

The young talent, who is a superlative dancer, said he is scared of his parents.

“I am very restless and have a lot of anger within me but I channelise that through my dance and exercise. I believe in expressing anger in the right way.”

Tiger is known for his dancing as well as action scenes, but he is not bothered about getting typecast.

“I am glad that I have created an identity for myself so early in my career.”

The actor is awaiting release of upcoming superhero film “A Flying Jatt”.

Actor Krushna Abhishek was in for a surprise when his sister Aarti dropped in at the sets of TV show “OMG! Yeh Mera India” to spend time with him.

According to a source, since they don’t get to meet often due to busy schedules, Aarti was very excited to meet Krushna, who is hosting the History TV18 show.

“They spent some quality time together before Krushna sets off on his shooting tour around the country for the second season of the show,” the source said.

The show presents some ‘OMG’ facts about its people and places in an entertaining and refreshing manner.