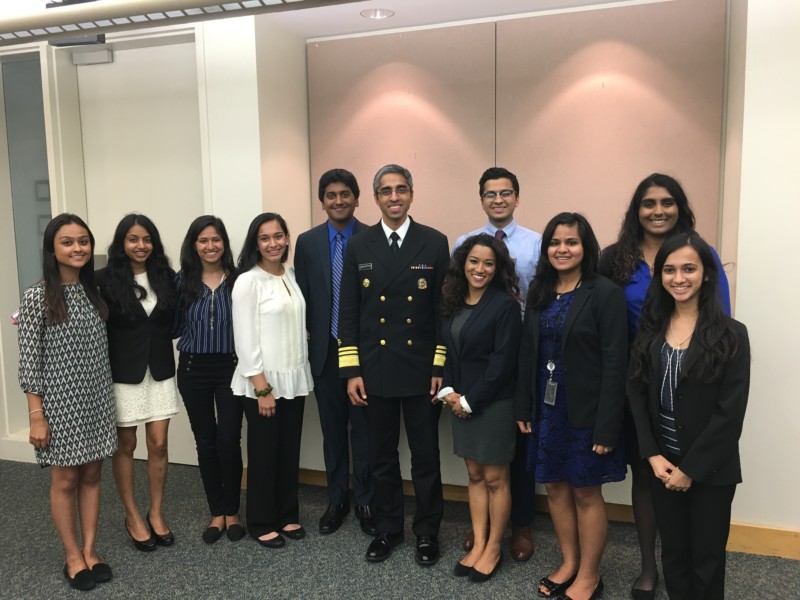 Juli Adhikari, interning at the Department of Labor, is a rising junior at the University of California, Berkeley. She intends to graduate with a double major in Political Science and Gender & Women’s Studies. She hopes to combine her passion in advocacy and interest in policy work to find pragmatic solutions to radical ideologies. Within her campus, she is very active in the Associated Students of the University of California as well as her pre-law fraternity, Kappa Alpha Pi. Originally born in Kathmandu, Nepal, Juli is also active in the South Asian community in and outside of the Bay Area. She currently serves as the Leadership Development Coordinator for the South and Southwest Asian, North African Coalition. Juli also has extensive experiance and interest with Bay Area non-profits such as Global Ties San Francisco and Mieklejohn Civil Liberties. She also currently serves as a political workshop facilitator for the national non-profit, IGNITE. In her free time, Juli loves to binge Netflix shows with her twin, eat tons of unhealthy food and explore different places! Safiyah Bharwani, interning at the Department of Commerce, is a rising third-year Robert W. Woodruff Scholar at Emory University double majoring in Economics and Mathematics & Political Science. She is alight with passion for public policy, economics, and unravelling social inequality through human rights advocacy and social entrepreneurship. In pursuit of these interests, she actively works to combat global poverty as a fellow with the Vision in Action program, a servant leader with Emory’s Forum program, and a writer with the Emory Wheel. Even more, she recently led a team to Shanghai to compete in the regional finals for the Hult Prize, a $1 million startup social entrepreneurship competition. In addition, Safiyah is co-authoring a research paper with Dr. Emily Bianchi and leading a research project under the mentorship of Dr. Sabino Kornrich. However, Safiyah is defined most personally by her creativity both as a musician and as a writer of poetry and prose. In her spare time, she immerses herself in reading everything from astrophysics to news publications, practicing her viola and guitar, and solving puzzles. Shruti Gupta, interning at the Department of Health and Human Services, is a rising senior at Emory University, where she is a Goodrich C. White Scholar double majoring in chemistry and economics. She is currently involved in HIV/AIDS drug development for her thesis in organic chemistry. Shruti is interested in closing the gaps between health, science, policy, and people. She hopes to pursue an MD/MBA in order to bring the insights of a bedside physician to the meeting table, in terms of health policy, not-for-profit work, and the government’s role in science research. Shruti has previously interned with Dr. Harsh Vardhan, Minister of Science and Technology of India, and has conducted research on the private sector’s impact on malnutrition in India. On campus, she is an active member of ChEmory, TEDxEmory, and Delta Phi Epsilon. In her free time, Shruti loves to dance, watch Bollywood movies, volunteer at Children’s Healthcare of Atlanta, and explore new restaurants. Faryal Jafri, interning at the Department of Defense, is a rising junior at Tufts University studying International Relations with a concentration in security studies and a minor in economics. She is a Tisch Scholar through the Jonathan M. Tisch College of Citizenship and Public Service working with the Immigrant Services Health Providers Group/Health (ISPGH) on creating culturally competent health care access for Muslims in the Boston area. Faryal is currently interning as a Virtual Student Foreign Service intern for the US Consulate General in Peshawar Pakistan. On campus, she is involved in the sorority, Chi Omega, and serves as the Asian American Community Representative on the Tufts Community Union Senate. In her free time, she enjoys catching up on the Daily Show, reading the news, and spending time with friends. Mishi Jain, interning at the White House Initiative for Asian American and Pacific Islanders, is a student at Rice University double majoring in Political Science and Policy Studies and minoring in Politics, Law, and Social Thought. Her policy interests are concentrated in foreign policy and international relations, as well as immigration policy. She recently spent the semester abroad studying, researching, and interning in London, England. While conducting comparative research on the asylum-seeking processes of London and Istanbul, she interned as a policy analyst at Pro Capital UK. She has been the recipient of various Asian American scholarships and is highly involved with the Jain community through her role on the Young Jains of America (YJA) Executive Board. On campus, Mishi is actively involved with various organizations such as the Baker Institute for Public Policy Student Forum where she encourages policy discourse among her peers. Additionally, Mishi is involved with student government and is working to establish an American Association of University Women (AAUW) chapter at Rice University. In her free time, she enjoys competing on the Rice Chowl Bhangra team and cheering on the Houston Rockets. In the future, she plans to attend law school and pursue a career in public service. Rahima Jamal, interning at USAID, is a rising junior at the University of Pennsylvania studying Philosophy, Politics, and Economics and minoring in Marketing and Consumer Psychology. During her time at Penn, Rahima has tutored elementary school students in the under-funded West Philadelphia school district, served as a community service consultant through the Marketing Undergraduate Student Establishment, and spearheaded the creation of PennFaces, a website that highlights student resilience on campus in order to promote vulnerable, open communication. When it comes to public policy, Rahima’s primary interests are international development and human rights law, in addition to the complex relationship between race, crime, and punishment in the US legal system. Outside of academics, Rahima genuinely enjoys having heart-to-hearts with close friends, reading The New York Times, people-watching in quaint, cozy coffee shops, and watching lots of Scandal. Vishal Narayanaswamy, interning with Congressman Ami Bera, is a rising sophomore at the University of California – Berkeley, double majoring in Political Science and Economics with a minor in Public Policy. He is originally from Madison, WI, where he cultivated a love for politics through speech and debate, interning with State Representatives, and serving as a Student Delegate to the United States Senate Youth Program. At Berkeley, Vishal is a Staff Writer for the Berkeley Political Review, the leading nonpartisan political quarterly campus magazine, and was most recently featured for his Fall 2015 cover story on women’s reproductive rights. He is also a Congressional Debate Coach for The Harker School in San Jose, CA. In his spare time, Vishal enjoys watching political satire and building with Lego. In the future, Vishal hopes to serve in government or be part of the policy-making process. Rina Patel, interning at the Department of Education, is a rising junior at Bryn Mawr college studying the Growth and Structure of Cities, with Minors in Political science and Environmental studies. She’s very interested in how the growth of urban spaces affects policy both internationally and domestically.  She loves that cities are the center of culture, life, and social change in any country. She’s especially interested in how proper city planning can provide happy healthy communities for all people and increase access to vital resources such as education, and clean water and sanitation. She is originally from Chicago where she had the privilege of working at three different museums, which is why exploring museums is one her favorite things to do in a new city.  She is very excited to be returning to DC for the third time this year before going abroad next semester to study cities and their communities in Brazil, South Africa and India. In her spare time she can be found watching copious amounts of Netflix and learning how to work out. Shivam Shah, interning at the Department of Health and Human Services, is a Darwin Turner Scholar and an Honors graduate of the University of Cincinnati where he studied neuropsychology and philosophy. In 2014, he became the first Indian-American male student body vice president in UC’s history. Shivam gave a TED Talk on the psychology of classical piano at TEDActive, a global TED Conference in 2015 and founded TEDxUCincinnati. He is also involved in the Asian American Association, the University Funding Board, Midwest Dhamaka, and the Indian American Chamber of Commerce. Shivam created the Discovering Leadership Program, a leadership development program for incoming freshmen and is a national semi-finalist for the Fulbright Award. In his free time, Shivam enjoys volunteering at an inner city health clinic, composing music, and drinking different types of coffee. Shivam will earn an MD and an MPH and hopes to return to medical policy work in the future.