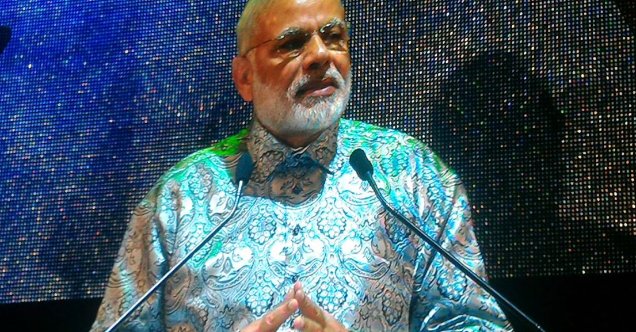 “When I see all of you, I am reminded of your ancestors and their struggles and bravery,” Modi said in his trademark Indian diaspora rally at the Ticketpro Dome, the entertainment hub of Johannesburg.

“Under decades of apartheid isolation, they not only preserved culture, tradition and language, they also gave them new wings to flourish,” he said to the cheers of over 11,000 people.

“The beauty of Hindi, Tamil, Gujarati, Urdu and Telugu continues to enrich the fabric of South African society.”

There are around 1.2 million people of Indian origin in South Africa, most of whose ancestors were brought here as indentured labour.

This apart, there are also estimates of 15,000 to 20,000 Indian nationals and professionals who are new immigrants.

“The colours of Holi, the sparkle of Diwali, tastes of Pongal, and festivities of Eid are not just the rainbow of Indian traditional cultural resources,” Modi said wearing a Madiba shirt, an Indonesian batik shirt that was a favourite with late anti-apartheid icon Nelson Mandela.

Following the diaspora rally, the Prime Minister will leave for Durban where his engagements are scheduled for Saturday.

Modi arrived in South Africa from Mozambique on Thursday night on the second leg of his four-nation tour of Africa.

This is his first visit to mainland Africa and is also the first prime ministerial visit from India to South Africa since then Prime Minister Manmohan Singh arrived in 2013 for the G20 summit in Durban.

Apart from Mozambique and South Africa, Modi will also visit Tanzania and Kenya.(IANS)