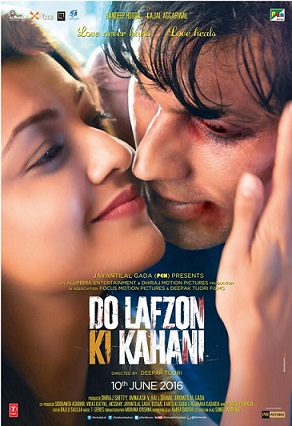 Korea dominates Bollywood this week. Barely had we gotten over Anurag Kashyap wondering if we live in North Korea (we don’t, the Information and Broadcasting Minister has assured us), there come two Korean remakes on the same Friday.

The far superior “TE3N” reprises the Korean film “Montage”. The other new film “Do Lafzon Ki Kahani” is actor-turned-director Deepak Tijori’s heartfelt adaptation of the Korean film “Always”, about a disgraced guilt-stricken boxer and a happy but visibly impaired girl whom he falls in love with.

The theme has been done earlier in films as far-ranging as Douglas Sirk’s “A Magnificent Obsession” and Gulzar’s “Kinara”. Deepak Tijori is unable to whip up a powerful concoction on the pain and suffering of two opposites locked in a love relationship.

Sooraj has a past. Since he’s played by Randeep Hooda, this past angst is pinned down to the narrative with persuasive energy. Randeep’s coiled clenched performance nourishes the arid areas of Tijori’s narrative. His scenes in the boxing ring have more punch than the film’s romantic backbone. The actor is far more well prepared than the script.

Kajal Agarwal drags a dollop of sunshine into a film that constantly plunges into a morose mood. Her Jenny is blind yet able to see what the eyes often miss. Kajal plays the girl without a shred of self-pity or regret. A truly inspiring performance in an otherwise staid telling of a tale of a blind girl and the redemptive journey of the man responsible for her predicament.

There are undoubtedly some magical moments between the lead pair. The lovelorn looks Randeep darts at Ms. Agarwal are worth their weight in gold. But the film comes a cropper while negotiating its way through the lovers’ lives. Their tiffs convey a sense of believability, belied by the script’s constant dependence on romantic clichés to carry the narration forward.

Nonetheless, the lead actors share some genuine warmth. Unforgivably, the music given to nourish their soul is uneasily anaemic. With fresher dialogues, more credible situations and a less clunky attitude to that thing called love, “Do Lafzon Ki Kahani” could have been a far more gratifying ode to romantic yearnings.