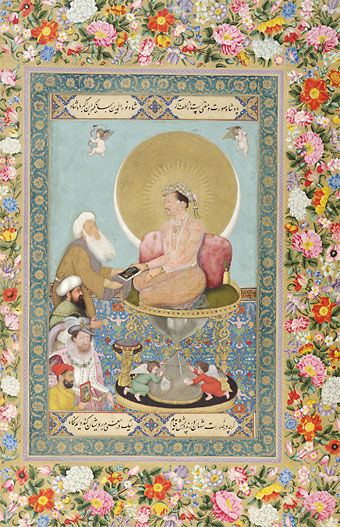 London– Presenting unique opportunities for new art collectors and connoisseurs, Christie’s upcoming sale on this week here, will have a private collection of Mughal, Pahari and Rajput paintings and works by leading modern masters such as Vasudeo S. Gaitonde, Jehangir Sabavala, and M.F. Husain alongside unseen works of art, including that of Ram Kuma, from important private collections across the globe.

As a part of its “South Asian Modern and Contemporary Art sale”, Christie’s “Arts of India Sale” will showcase over 300 years of artistic practice and will conclude with an online sale entitled “Images of Rajasthan”.

“Arts of India” will offer collectors fine works of art from the Indian subcontinent dating from the late 16th to the early 20th centuries.

From jewelled and enamelled pieces, including a late 19th century diamond set, a gold bowl unusually decorated with astronomical figures (estimate: 20,000-30,000 pounds) to fine textiles and Indo-Portuguese furniture, the sale offers something for all tastes.

Other highlights include a private collection of Mughal, Pahari and Rajput paintings acquired by a discerning private collector from Colnaghi (estimate 2,000-12,000 pounds); an illustration to the Bhagavata Purana: The Abduction of Rukmini, circa 1780-90 (estimate: 40,000-60,000 pounds) and a rare pilgrimage map of Vraj and the Yamuna River (Vrajyatra) from North India and dating to the second half of the 19th century (estimate: 30,000-40,000 pounds).

Following Christie’s 2015 India Sale in Mumbai, which set a new benchmark for Gaitonde and achieved a new world auction record for any modern Indian work of art, the London sale will offer one work on paper and two paintings by the master.

The large pivotal canvas from 1958 (estimate: 800,000-1,200,000 pounds) is one of the first examples of Gaitonde’s radical shift to a fundamentally non-objective form of art and part of the proceeds of the sale of this painting will benefit The Savara Foundation for the Arts.

Both paintings trace the evolution of Gaitonde as a painter and philosopher and exemplify the delicate balance of light, texture, colour and space for which his canvases have received international acclaim after major retrospective at the Solomon R. Guggenheim Museum, New York and the Peggy Guggenheim Collection, Venice in 2014-15.

With the Tate Modern opening of Bhupen Khakhar’s first UK major solo retrospective this June, the sale will present three works by him, including At New Jersey (1986, estimate: 50,000-70,000 pounds) displaying the artist’s whimsical yet deeply moving portrayals of everyday life.