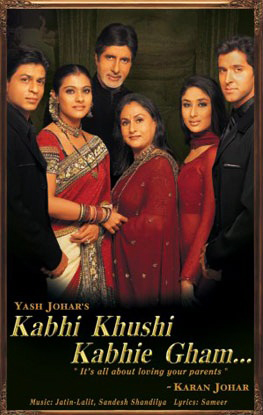 New Delhi–Actor Abhishek Bachchan says he would like to work in a remake or a sequel of the 2001 film “Kabhi Khushi Kabhie Gham”, which starred his father Amitabh Bachchan in a pivotal role.

“My dream film is ‘Kabhi Khushi Kabhie Gham’. If there is a remake or even a sequel, I would like to be a part of that,” Abhishek told IANS here.

The 40-year-old, who is married to former beauty queen Aishwarya Rai Bachchan, was here to promote his forthcoming film “Housefull 3”, along with his co-stars Akshay Kumar, Riteish Deshmukh, Lisa Haydon and Jacqueline Fernandez.

Directed by Sajid-Farhad, “Houseful 3” also stars Nargis Fakhri and is slated to hit the theatres on June 3.

Actor Tahir Raj Bhasin, who will be seen in a grey character in “Force 2”, says “silly stereotypes” in the film industry annoy him.

The actor, who rose to fame with his negative character in “Mardaani”, added that an actor should be able to break the mould of a previous character, and take on new challenges. Sadly for him, he has only been getting offers to play negative characters post “Mardaani”.

“Ironically, I am not a very angry person, but what makes me angry are the silly stereotypes in real life and in our film industry. Actors should be seen as actors and not in a particular character they might have played previously,” Tahir said in a statement.

“I feel actors should get to portray different characters to expand their genre,” he added.

Tahir expressed his views when he got The Angries award for speaking up against the issue. The Angries is a special award by the team of the forthcoming film “The Angry Birds Movie”.

As the name suggests, the film is all about expressing anger, speaking up for right and finding a right way to channel anger. On the same lines, a campaign titled The Angries has been started wherein the birds award celebrities who get angry for a good cause.

Taking the basic structure of Rovio Entertainment’s mobile game of the same name, the movie brings the game’s action to the big screen in a witty manner.

In the game, angry but cute little birds fight it out with pigs which have stolen their eggs.

The film is supported by Jason Sudeikis as Red, Danny McBride as the volatile Bomb, Bill Hader as a pig, Maya Rudolph as Matilda, and Peter Dinklage as the Mighty Eagle. It will be distributed by Sony Pictures.

The film will hit the screens in India on Friday in English, Hindi and Tamil.

Actress Kalki Koechlin has lauded Radhika Apte for her performance in the forthcoming film “Phobia”, calling her a “brilliant actress”.

Kalki took to Twitter to appreciate the “Badlapur” actress on Thursday.

“My Radhika Apte, you are one brilliant actress and ‘Phobia’ is one kickass psychological thriller, don’t miss it,” Kalki tweeted.

On the work front, Kalki will be seen sharing screen space with veteran actor Naseeruddin Shah in the forthcoming film “Waiting”.