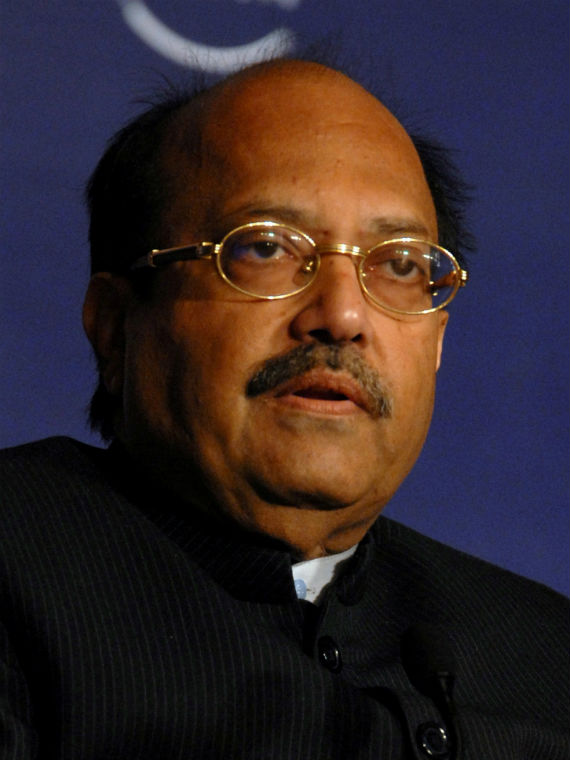 Lucknow– Despite earning humiliating sobriquets like ‘dalaal’ (power broker), ‘daga kartoos’ (spent force) and many more from leaders of the ruling Samajwadi Party in Uttar Praddesh, Amar Singh returned to the party on Tuesday, powered by a ticket to the Rajya Sabha. And the ‘Amar Mitra Katha Part II’ seems to be on the roll yet again.

Samajwadi Party (SP) chief and Amar Singh’s old friend Mulayam Singh Yadav had his way and ensured that his protege returned to the upper house of parliament on a party ticket. But insiders say, the decision was not easy during the parliamentary board meeting. However, it had the signature ‘dhobi patak’ (a wrestling move wherein an opponent is slammed straight to the ground) of ‘Netaji’ Mulayam.

Party general secretary Ram Gopal Yadav, instrumental in Singh’s exit in 2010, was “silently uneasy”; and bete noire Azam Khan was vocal in his opposition. But the ‘Amar Mitra Katha’ had been scripted and the deal was sealed much before the meeting, sources said.

Realising that there was a large section in the ruling party that was averse to his return, sources say the Thakur leader had “mended fences and his ways” with some of the satraps. It all started with a “very emotional meeting with Mulayam some months ago” when the two sat down in a Lutyens’ bungalow in Delhi to reminisce about the old times.

Mulayam sought his son Akhilesh Yadav’s endorsement on Amar Singh’s return to the fold. Though not completely convinced, Akhilesh reluctantly agreed like an obedient son, and the Amar bandwagon started rolling.

On Wednesday, Amar Singh told IANS that he only came to know of the development at 10 a.m. on Tuesday. He refused to comment any further.

Known to forgive and forget and move on in the political and personal space, Mulayam now is set to sign on the dotted lines for return for his friend to the Samajwadi Party.

But even as Amar Singh’s re-entry to the SP was being talked about since he shared the dais with Mulayam and Akhilesh Yadav at an event in 2014, life may not be that easy for him in the coming days.

Late on Tuesday, soon after reaching his Rampur assembly constituency, Khan said he “was hurt by the developments”. Referring to Mulayam, Khan said the Samajwadi Party supremo “was the maalik (owner) of the party and that he had little choice but not to challenge him.”

However, PWD Minister and Mulayam’s brother Shivpal Singh Yadav dismissed any dissidence. It may be noted that Shivpal has always been close to Amar Singh, who recently threw a wedding reception party in Delhi for Shivpal’s son.

Jaya Bachchan is also likely to act as a stumbling block for Amar Singh in the future. However, for now he seems to be with the right set of people, heading for a new innings in politics. (IANS)