Mumbai–Police here on Tuesday registered a case against actor-producer Rahulraj Singh for allegedly abetting the suicide of popular TV actress Pratyusha Banerjee following a statement from her mother Soma Banerjee, an official said. 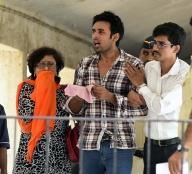 Among other things, she accused Rahulraj of allegedly assaulting Pratyusha, but his (Rahulraj’s) lawyer said they would challenge it in the Bombay High Court.

Rahulraj — who was interrogated by police for two days after Pratyusha’s suicide on April 1 — is presently undergoing treatment in a suburban hospital for the past two days.

Police have sought a report on his health status and he is likely to be arrested after his discharge from hospital in a day or so, although his lawyers point out that he was not in a condition fit for interrogation.

Police have charged Rahulraj with abetment of suicide, voluntarily causing hurt, criminal intimidation and intentional insult with intent to provoke breach of peace under relevant sections of the Indian Penal Code.

Since Pratyusha’s death, her friends, colleagues and television industry workers have claimed that one of the reasons behind her suicide was the alleged rocky relationship with her boyfriend.

At least 10 of them have come forward to give statements pertaining to the tumultuous relationship between Pratyusha and Rahulraj, allegations of assault, unconfirmed financial issues between them and reported torture of Pratyusha by a former girlfriend of Rahulraj.

This is the second high-profile case in which the victim’s boyfriend has been booked for abetment — the previous being the Jiah Khan case in which her boyfriend, actor Sooraj A. Pancholi, is facing similar charges.

Jiah’s body was found from her Andheri flat on June 3, 2013 and the case was subsequently also probed by the Central Bureau of Investigation after a plea by her mother Rabiya Khan. The probe agency filed a supplementary chargesheet in December 2015. (IANS)