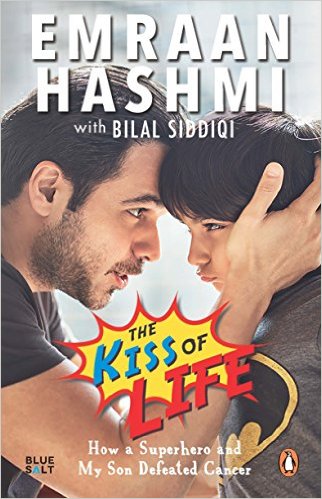 New Delhi–Actor Emraan Hashmi, who is receiving rave reviews for “The Kiss of Life: How A Superhero and My Son Defeated Cancer”, a book that talks about his family’s struggle with his son Ayaan’s cancer treatment, says he doesn’t like to share every detail of his personal life with public.

“I have done that for 12 years in the film industry because I like to keep a few things personal. I respect people around me like family members and friends. They are not –quote, unquote — glamorous people,” he added.

“So, I keep their things (privacy) intact. But for this (book) I call the consent of my wife (Parveen) because this was larger than our problem and we were trying to go out and share personal experiences with people,” added Emraan, best known for his roles in films like “Murder”, “Jannat” and “Once Upon a Time in Mumbaai”.

Born in February 2010, Ayaan, the first child of Emraan and wife Parveen Shahani, was diagnosed with first stage cancer at the age of four in early 2014.

Emraan, who has co-written the book with author Bilal Siddiqi, said the idea of writing a book never came to my mind until author Hussain Zaidi asked him to do it.

“Hussain came to me and discussed my son’s (Ayaan’s) treatment. There was a lot of revelation from my side about cancer.

“He was surprised by hearing that and said that this should be documented and what he said made perfect sense – he said that if this book gets out to one family battling with this disease and informs them and gives them all the knowledge they need – it would be a victory for you,” Emraan shared.

During Ayaan’s treatment in Canada, Emraan was shooting for “Raja Natwarlal” and “Mr. X” in India.

“It was more difficult when I had just come here and was fresh out of his treatment in Canada. Gradually, it got little easier, but those three months of his were like hell for me and my family. It was my wife actually who was attending all those things in Canada,” Emraan said.

Ayaan has been out of danger for the last two years now, Emraan said.

Any plans of documenting “The Kiss of Life” into a film?

Emraan even shared that after Ayaan’s treatment, he has taken him to film sets a couple of times.

“I have taken Ayaan to film sets. But he doesn’t sit in one place. He keeps running around here and there. So it becomes a little difficult,” Emraan said.

“I took him to ‘Azhar’ set. So he likes coming there. He loves playing cricket. He loves sports. He is an outdoor person. I have played cricket with him. Now I’m waiting for the release of the film,” he added.

“Azhar”, a biopic on the life of former cricketer Mohammad Azharuddin, will feature Emraan in the title role.

The film, directed by Tony D’Souza, is slated to release on May 13. (IANS)