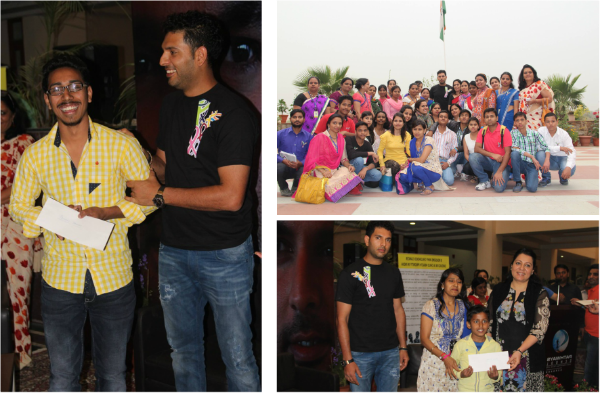 New Delhi–An innovative experiment of raising charity funds through screening feature films in cinema halls seems to have come as a big relief for nine cancer-afflicted girls in Karnataka who are now looking forward to regular fund flows for uninterrupted treatment.

NGO CanKids Kidscan has joined hands with producers of Kannada film “The Plan” to raise awareness and funds for its Girl Child Project that offers treatment and support to girls with cancer.

The funds collected by the NGO, along with the film’s producers – Malgudi Talkies and Day Dream Creations – will support the nine girls in Mangalore by offering treatment, emotional and psychological support, transportation, nutrition, education, accommodation and social reintegration.

For a daily wage labourer who is the father of nine-year-old Fathimath Misbha, diagnosed with Acute Lymphblastic Leukemia, the funds would be a blessing for his child.

“We don’t have money. If they don’t help, we would stop the treatment,” said Fathimath’s father.

The NGO and the film’s producers are aiming to collect Rs.12 lakh through crowd funding for the nine girls through advance sale of tickets of a special re-release of the movie in Mangalore, Udupi, Karkala and Kundapur on April 22.

The producers were about to release a free digital version of the movie on YouTube when a call for a donation from an acquaintance for the cancer treatment of a school girl threw up the idea of generating funds for charity through film screenings.

The Mumbai-based Malgudi Talkies’ chief Ashok Shetty said: “My friends suggested that rather than releasing a free version of the film on YouTube, we could re-release it on select screens and collect charity funds through advance sale of tickets.”

He said donors can contribute and save a girl’s life and get free tickets of “The Plan” by visiting http://malguditalkies.in/shop/

“We are going to colleges and cities to highlight the cause linked to the re-release of the film. We are aiming to collect Rs 12 lakh for the nine cancer bravehearts,” Shetty said.

“For every ticket that is sold, Rs.60 would be directed towards the treatment of the nine girls,” said Shetty.

Film director Keerthi said if the experiment for the cause is successful, they may continue to re-release the movie in other parts of the state too.

All the nine girls undergoing treatment at KMC Hospital, Mangalore, are under the care of Dr. Harsha Prasad L, assistant professor in the department of paediatrics.

“A majority of childhood cancers are curable. It is a crime not to seek medical help for a girl child with cancer,” Prasad maintained.

“The Girl Child Project campaign will help create awareness about the importance of treating girls similar to boys,” he added.

CanKids KidsCan chairman Poonam Bagai said: “Such a crowd funding initiative has been attempted first time by us in partnership with Malgudi Talkies and Day Dream Creations.”

“Gender discrimination in our country is prevalent at all levels. In a study in Haryana in 2013, we found that girls with cancer seem to be facing discrimination as compared to boys,” she said.

“Some parents do not want to inform relatives or neighbors about this ailment as it could hamper the marriage prospect of their other children,” she said.

The CanKids Girl Child project aims to strengthen and empower girl patients and survivors to become leaders and ambassador of childhood cancer, she said.

CanKids Kidscan is a non-profit organization for childhood Cancer in India. It works on all aspects to bring a change in childhood cancer from support services to awareness, advocacy, stakeholder engagement, capacity building, quality care, research and impact.

Cancer kills as many as 264 children per week in the country. As many as 13,726 deaths due to childhood cancer occurred in India in 2010, of which is 0.7 percent of deaths were among those aged one month to 14 years. (IANS)