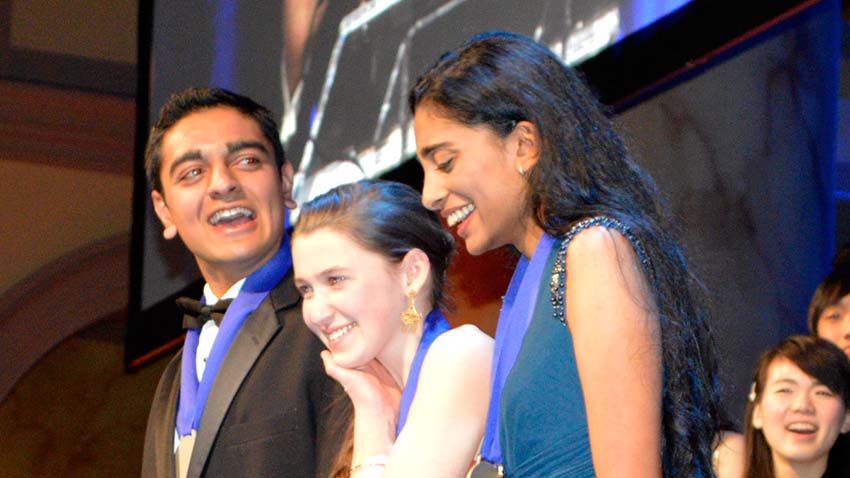 New York–Breaking a three-year dry spell for Indian-Americans, two 17-year-old high school students have won the top prize of $150,000 with their medical-related projects in the prestigious Intel Science Talent Search contest, the society for Science and Public (SSP) announced on Tuesday.

Although Indian-Americans have formed one of the largest ethnic contingents year after year at the contest and won several prizes, none had won the top prize since 2012 when Nithin Reddy Tumma received it for cancer research.

Two of the $75,000 second prizes, and two of the $35,000 third place prizes this year were also bagged by Indian diaspora teenagers.

Amol Punjabi won the First Place Medal of Distinction for basic research for developing a software that could help drug makers develop new therapies for cancer and heart disease. He is from Marlborough in Massachusetts.

Maya Verma used $35 worth of hobbyist electronics and free computer-aided design tools to create the low-cost device that diagnoses lung disease as accurately as expensive devices currently used in medical laboratories, the SSP said. She is from Cupertino in California.

SSP president Maya Ajmera said: “They and the rest of the top winners of Intel STS (Science Talent Search) 2016 are using science and technology to help address the problems they see in the world and will be at the forefront of creating the solutions we need for the future.”

The prizes were given in three categories: Basic research, innovation and global good. All the Indian winners were in the research and innovation categories.

Meena Jagadeesan of Naperville, Illinois, won the Second Place Medal of Distinction for basic research for her work in mathematics.

Meena investigated an object in algebraic combinatorics, or the mathematics of counting, to reveal a novel relationship between classes of graphs.

For his study of random nanowire networks as a less costly alternative to the transparent conductors now used in touchscreen devices, Milind Jagota won the Second Place Medal of Distinction for Innovation. He is from Bethlehem, Pennsylvania.

Shroff of Great Falls, Virginia, discovered new relationships between the key protein associated with Huntington’s disease and the biological processes of cellular death that cause Huntington’s symptoms. His work may lead to new treatments, SSP said.

Ravichandran studied the use of nanomedicine to destroy potentially fatal blood clots that can cause heart attacks and strokes. She is from Westlake, Ohio.

Fourteen Indian diaspora students were among the 40 students chosen to be finalists from among 1,750 students who entered the contest. The finals were held in Washington.

Among the Indian students’ projects, eight related to the field of medicine, and three to mathematics, with one combining mathematics and cancer research.

This is the 75th year of the Science Talent Search competition, whose alumni have gone on to win 12 Nobel prizes, two Fields Medals, 11 National Medals of Science, 18 MacArthur Foundation “Genius” Fellowships.

One of the MacArthur fellows is computer scientist Maneesh Agrawala, a 1990 Science Talent Search finalist.