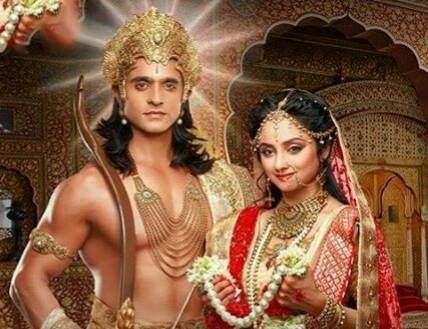 Mumbai–Actress Shilpa Shirodkar had a major fall on the set of TV show “Silsila Pyaar Ka”. A particular sequence required the actress, who plays the role of Janki in the Star Plus show, to walk down the stairs while delivering her dialogues. While doing so, she lost her balance and accidentally slipped on the staircase recently.

The unit members, including her co-star Abhay Vakil, immediately rushed towards her since she was injured and couldn’t stand on her own. Recalling the incident, Shilpa said in a statement: “I slipped on the set very badly and hurt my back. It was an accident. I thought for next one or two months that I wouldn’t be able to get up from the bed, but luckily it is not a fracture.”

“I can’t walk right now so thankfully my director has tweaked my part and made it in a way, so that I can rest at home,” she added.

Karan Mehra will be getting a ‘Rajasthani’ makeover for a sequence in TV show “Yeh Rishta Kya Kehlata Hai”, and the actor was happy to flaunt a ‘mooch’ instead of scruffy stubble. When it comes to real life, the actor doesn’t seem to have much love for a moustache and prefers a clean-shaven look.

“I believe that staying clean-shaven suits me. Not that I don’t like it otherwise, but I’ve had this look for the longest time. Also, when these guys told me that I’d have to wear a moustache and I had the option to choose from a moustache and a stubble, I knew I would prefer the moustache since it is easier to wear and a look I’d support,” Karan said in a statement.

Karan is popular for playing Naitik Singhannia on the Star Plus show. As a treat to the small screen audience, “Yeh Rishta Kya Kehlata Hai” and “Diya Aur Baati Hum” will soon be seen addressing the social issue of child-trafficking through a special integration.

With a temporary merger of the two daily soaps, the main protagonists of “Yeh Rishta Kya Kehlata Hai” — Akshara (played by Hina Khan) and Naitik will be seen going undercover to rescue their daughter Naira (played by Ashnoor Kaur) with help from “Diya Aur Baati Hum” female lead IPS Sandhya Rathi (played by Deepika Singh). Both Karan and Hina have donned authentic Rajasthani outfits for the undercover mission.

Singer Shaan along with musician Gaurav Dasgupta has composed a romantic title track for “Dahleez”, a new Star Plus show. The title track “Jiya re” has been penned by Superbia band, which the musicians are a part of.

According to a statement, “Jiya Re” was initially composed for a movie which eventually got picked up for “Dahleez”. Jubin Nautiyal has crooned the song. Nautiyal was overwhelmed by the chance.

He said: “The band, who are the composers of the song, approached me to sing the song and I instantly said a yes. Little did we know, this song would get picked up by Star Plus giving us a great opportunity to reach out to their mass audience.”

The singer is excited about the song as “it’s for all the people in love, and it’s beautiful.” Set in Delhi, “Dahleez” is the story of two individuals — Swadheenta, a young aspiring lawyer and Adarsh, an IAS officer. Both have their respective sets of values and ideals which set them apart from the crowd.

Ali Asgar cooked up a treat for his “Woh Teri Bhabhi Hai Pagle” co-stars. And the actor is “thrilled” that he got a chance to showcase his culinary talent, and whip up some “mouth watering delights” for his colleagues.

Ali, who is also famous as Dadi from “Comedy Nights With Kapil”, calls himself a big foodie. The actor was recently in Delhi for the promotions of the SAB TV show, and he took out some time to go on a food scouting mission in the lanes of the national capital. Once back from the trip, he decided to cook for his co-stars.

“Food is my weakness and my passion. I enjoy cooking but it is a luxury I almost never have the time for. I am thrilled I got the opportunity to cook for my co-stars recently and hope to give them a taste of my mouth watering delights on a more often basis,” Ali said in a statement.

Mumbai–Comedian-actor Kapil Sharma says he watched ‘Comedy Nights Live’ show that has replaced his popular ‘Comedy Nights With Kapil’ and said it was different from his show. “Yes, I did watch it. They’re doing it in a different way; it’s not like how we did it. We then got busy with our show. If we keep looking at others, when will we do our work,” he said at the unveiling of his new show ‘The Kapil Sharma Show’.

‘Comedy Nights Live’, hosted by actor-comedian Krushna Abhishek, has replaced Kapil’s popular show after Kapil fell out with Colors channel officials due to various reasons. But after weeks of speculation, Kapil is out with ‘The Kapil Sharma Show’ on channel Sony.

Krushna reportedly is taking digs at Kapil on ‘Comedy Nights Live’. Will Kapil follow suit? “Our intention is to make 150 crore people in India happy, I don’t believe in all that; we focus on our work, so I don’t think I’ll do it.”

‘The Kapil Sharma Show’ will go on air on April 23.

Mumbai– Actress Sara Khan has been finalised to play the role of Surpanakha in the mythological show “Siya Ke Ram”. According to a source close to the production of the Star Plus show, “Siya Ke Ram” will soon witness the entry of a new prominent character, which Sara will be seen playing.

“The actress will soon begin shooting in Hyderabad along with the other cast of the show. The actress will be playing the role of Raavan’s sister,” said the source. The show narrates the story of “Ramayana” told from Sita’s perspective. Currently, the show highlights the married life of lord Ram (Ashish Sharma) and Sita (Madirakshi Mundle).