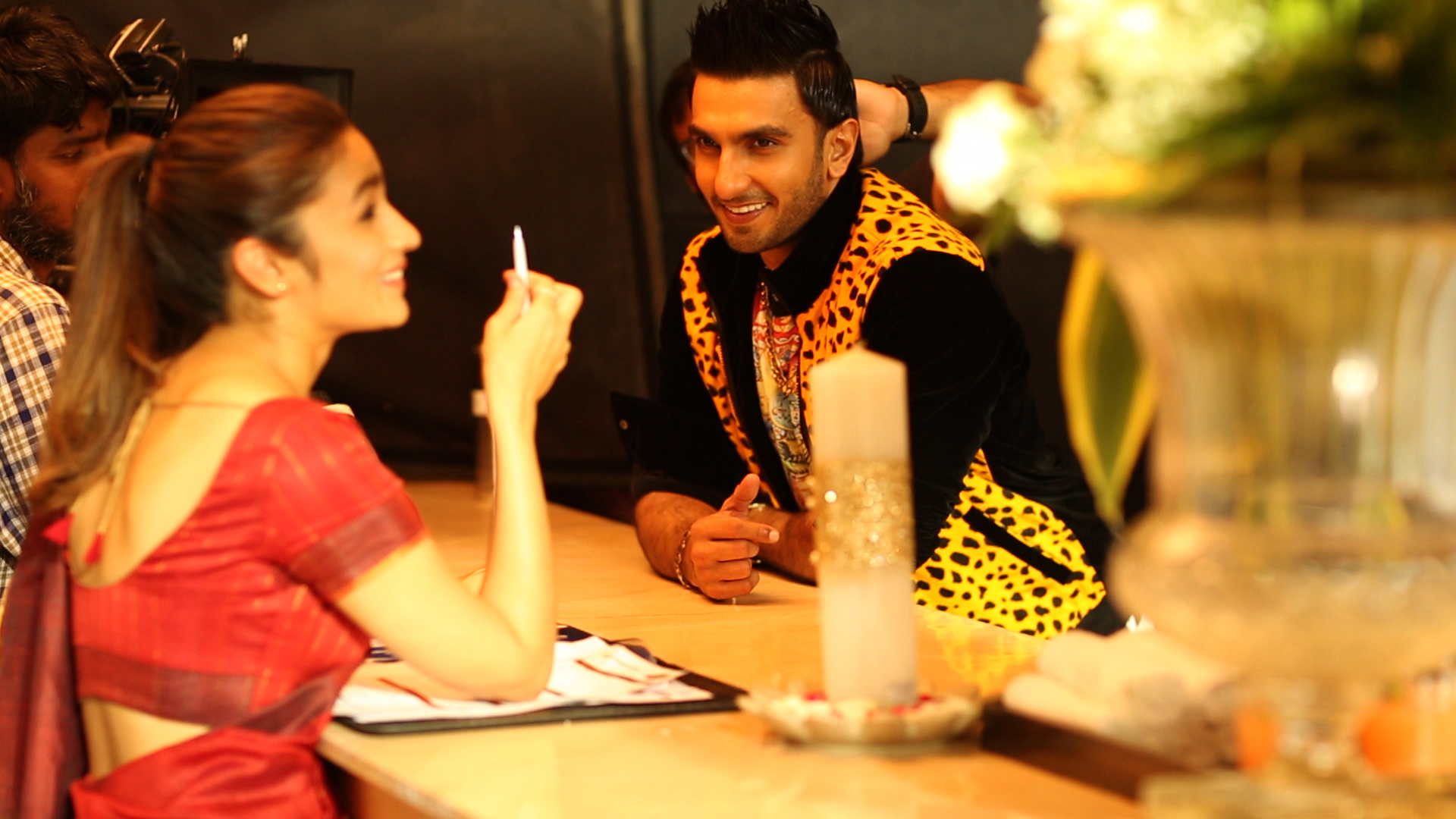 New Delhi–Actress Alia Bhatt has slipped into a taxi driver’s garb, while Ranveer Singh is seen as a probable passenger of her car in images from a mystery project. They are said to be coming together for the first time for a project, details of which have been tightly kept under wraps.

Wearing a pair of aviators and holding a glass of ‘cutting chai’, Alia sports the look of a taxi driver very well as she leans on a good old black and yellow taxi; while Ranveer, in his bespectacled avatar, looks every bit a simpleton as he sports oil-laden hair and has a bag on his shoulder.

In another image, Alia sports a sweet and simple get-up in a maroon sari and a ponytailed look, and Ranveer flaunts a bright and funky leopard print jacket, with a mischievous smile on his face. One wonders what the project is about — but given that both the actors are quite a sensation in Bollywood, it will be interesting to know what they have paired up for.

Tiger, Shraddha couldn’t believe they were doing film together

Mumbai–“Baaghi” leads Tiger Shroff and Shraddha Kapoor, who have been friends since school, couldn’t believe that they were actually doing a film together and found it a “surreal” experience. “When you go to school with someone, and then you grow up, and both of us have the dream to act, and you end up acting with someone you’ve gone to school with, so it’s really surreal.

“From the first day till the last in between shots, I would be saying, ‘Tiger, can you believe it, we are doing a film together’ and he would say, ‘I can’t believe it, Shraddha’, so we were very excited to be working together,” said Shraddha at the trailer launch of the film, directed by Sabbir Khan.

The story is about Tiger’s character Ronny, who is sent to an academy to learn a particular form of martial art, but doesn’t show too much dedication and is more interested in wooing Shradda’s character Sia. But when she gets abducted, he gets fully dedicated to the training to rescue his love.

Mumbai–He has been a part of films of various genres, but action remains actor-producer John Abraham’s all-time favourite.

John, who has been saying that the stunts in his next film “Rocky Handsome” are of an altogether new level in Bollywood, said in a statement: “Be it little kids, boys or grown up men, we have all been fascinated by action throughout our lives. I’ve mainlined on movies of superheroes, action men and never-back-down toughies locked in intense, fierce combat, gripping the weapons of their choice.

“That style and panache, their grit and guts have been the things that have kept us engaged and enticed. Action is definitely my favourite genre in movies, and I have myself pulled off a few stunts in some of my films, including ‘Rocky Handsome’.” The actor has shot a promo for a section of English movie channel Movies Now. He has filmed it for popular action-movies-packed offering Weapons of Choice, which features top-rated action films every weeknight. On this platform, John also cross-promotes his “Rocky Handsome”.

The film revolves around a man who sets out to take revenge against the drug mafia after they take away an eight-year-old girl, with whom he shares a special bond. It will hit the screens on March 25.

I’ve got used to people knowing me outside India: Priyanka

New Delhi–Actress Priyanka Chopra, whose international debut TV show “Quantico” has got a renewal and whose Hollywood debut “Baywatch” is already under production, says Indian movies have a “global demographic” and that she is used to having fans abroad.

She says her fan base has expanded with the reach of foreign TV, and added that an artiste always yearns for “applause”. The actress answered some questions by fans through a special video posted on her official Facebook page. She spoke about how she gets along with her co-stars, her camaraderie with them and how she is relieved that the show is being liked by all.

On being asked about how it feels to get the kind of reception and recognition that she gets in India, in the US now, she said: “Indian movies have a very global demographic. So I’ve got used to a lot of people knowing me outside of India as well.

Mumbai– Actor Dino Morea has suffered a ligament tear, and says he hates the fact that he can’t move around much.

The 40-year-old actor took to Twitter, where he wrote: “Ligament tear, can’t walk for a few days. Hate not being able to move, I still love football. Dino Morea fitness.”

Dino also shared that he has “got a crutch for help”.

Impressed with director’s belief in my ‘Tevar’ role: Manoj Bajpayee

Actor Manoj Bajpayee, who has scored a nomination at a forthcoming awards event for “Tevar”, says he was impressed with the movie’s director Amit Sharma’s belief in the character. In the movie, Manoj portrayed Gajendra Singh, an obsessed politician and lover. For this, he has been nominated in the Best Actor in a Negative Role category at the second edition of the Times of India Film Awards (TOIFA), which is to be held in Dubai.

“I was impressed with director Amit Sharma’s belief in my character – Gajendra Singh. There were two to three facets of his personality which were endearing. I am extremely happy that it has earned me a TOIFA nomination,” Manoj said in a statement. Others who have been nominated in the same category are Nawazuddin Siddiqui, Darshan Kumar and Ronit Roy. The winning actor will be feted with a black elephant-shaped trophy with a film reel atop its trunk.

To be held on March 18 at the Dubai International Stadium, TOIFA will be co-hosted by actors Parineeti Chopra and Riteish Deshmukh. The event will be aired on Sony Entertainment Television for India.

Feel proud to be part of ‘Ardaas’: Badshah

Rapper and producer Badshah, whose real name is Aditya Singh, says he is “proud” to be a part of Punjabi film “Ardaas”. “Ardaas”, directed by Gippy Grewal, is based upon important and least talked upon social issues.

“As a producer, I feel proud to be a part of ‘Ardaas’. Thank you so much for showering your love and blessings on our film. @igippygrewal,” Badshah tweeted.