BOSTON–Indian vocalist and Berklee professor Annette Philip will serve as one of the coaches on the second season of WGBH’s televised singing competition, Sing That Thing!

Twenty-four amateur singing groups from across New England were selected from a field of more than 80 groups. Over the course of eight episodes, Sing That Thing! introduces viewers to a variety of genres from the world of vocal music, including a cappella, jazz, spirituals, hip hop, show choir and classical. 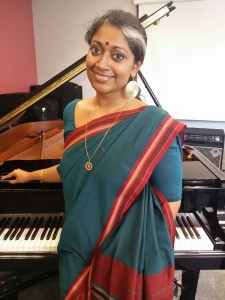 Sing That Thing! – the public television competition that celebrates the tradition and talent of New England singing groups—returns for a second season April 1 on WGBH 2.

“We are proud to share the exciting performances of some of the region’s most talented singers,” said Liz Cheng, WGBH’s general manager for television and co-executive producer of Sing That Thing!. “It was an honor to work with Emerson College and for the first time to collaborate with our public media partners across all the New England states.”

The Sing That Thing! coaches – Larry Watson, Annette Philip and Jared Bowen – provide constructive feedback to each group and determine which will advance to the grand finale. Watson, an educator, lyricist and civil rights activist, is a professor in the Berklee College of Music ensemble department. Philip, a vocalist, composer/arranger and faculty member at Berklee College of Music, won the 2014 national Harmony Sweepstakes A Cappella Championship with her quartet, Women of the World. Bowen, WGBH News executive arts editor, hosts WGBH’s Open Studio with Jared Bowen, Boston television’s only local arts series.

Performances will be punctuated by Master Classes, featuring vocal tips and educational moments from the coaches as well as local singing luminaries like MIT Director of Choral Programs Bill Cutter and Rockapella member Charlie Evett.

“Vocal music has the unique power to bring people from all backgrounds together in harmony,” said co-executive producer Patricia Alvarado Nuñez. “Congratulations to all of the groups from Maine to Connecticut who shared their unique talents with Sing That Thing!

Sing That Thing!, now in its second season, premieres April 1 at 8:30pm on WGBH 2. More information about the series is available at SingThatThing.org. Join the conversation with fellow fans on Twitter, Facebook and Instagram.

WGBH Boston is America’s preeminent public broadcaster and the largest producer of PBS content for TV and the Web. Television channels include WGBH 2, WGBX 44, and the digital channels World and Create. WGBH Radio serves listeners across New England with 89.7 WGBH, Boston Public Radio; 99.5 WCRB; and WCAI, the Cape and Islands NPR® Station.