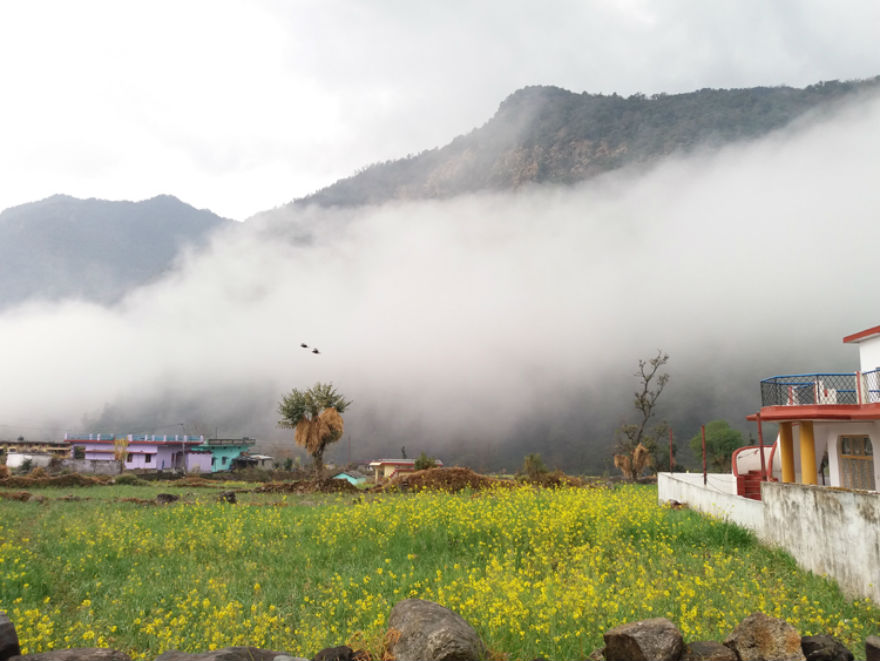 Chopta, Uttarakhand–The clouds kissed the mountain peaks; the sun played hide and seek, peeking out at times from behind those clouds, its rays cutting across the edges of spruce tree that stood tall on the valley, making their way to reach up to me. It kept raining while I was travelling to the hills – and then it snowed.

Taking a break from my routine, I was heading for Chopta, a small town in Rudraprayag district of Uttarakhand. Located 8,790 feet above sea-level on NH 58, the picturesque town is surrounded by mountains that offer glimpses of the mighty Himalayan range.

The road would bend and curve at every possible angle it could; the Ganga river was in its majestic colours – sometimes seablue, sometimes robin and at times skyblue; sometimes calm and then ferocious as it wound its way down, my constant companion as I approached my destination from Rishikesh.

The weather became cold as it was raining, making for a damp and dull environment. It gradually turned cold, with the wind chilling me to the bone benumbing my body – but my travelling spirit was indomitable.

Travelling in local bus gave me a chance to assimilate the local culture of the Garhwal region in which Chopta falls. The ‘pahari’ song being played in the bus and some small talk with the locals provided some relief during the hectic journey.

Though I thought I was successful in defeating the freezing climate, the demotivating rain and the sharp turns in the road were bearable but something heart-breaking was awaiting me.

As I was approaching Chopta after a tiresome bus journey of almost seven hours, soft white flakes began falling. The road and the valley got a white make-over and the hills were enveloped in a white sheet. Within moments, the road and the adjacent area had turned into a white ornament and the hill range looked no less than a necklace.

By the time snowfall stopped, the day had ended and the road to Chopta was blocked. Far in the distance, the sun bid adieu to the day, smashing the dull sky with a splash of red.

Mother Nature mesmerised me with her art of creating an enchanting scenic view. It looked no less than a painting, where every stroke of brush defined how she played with colours – with the sky serving as a canvas.

With a heavy heart, I settled for the night in a small village called Mandal, below Chopta, whose scenic charm hypnotised me the next morning.

The mountain range was standing tall just across the window of my room, glittering as the first rays of the sun touched the snow-clad peaks. The pine, spruce and maple leaves blinked at the sun’s rays and danced to the tune of the cold breeze blowing across the village.

Along with the whispering of the wind, the tinkling sound that a nearby tranquil stream made as it rushed over the stones on its bed, mingled into the atmosphere, accompanied by the chirping of birds to create a rapturous mood. 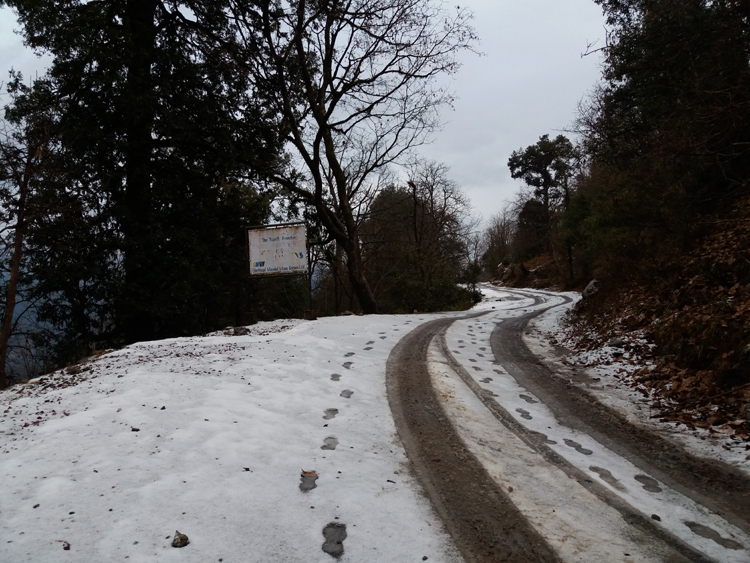 The dead maple leaves lying on the wet road welcomed me as I crunched them below my feet while I was engulfed by the wondrous beauty of the village. I recollected a few lines from Robert Frost’s poem The Mountain: “When I walked forth at dawn to see new things/Were fields, a river, and beyond, more fields,” while I strolled across the tiny village early in the morning.

Mandal village exudes a pristine charm. Away from the cacophony of city life, the village turned out to be the perfect gateway to sooth my soul.

While I was returning from the village I remembered another Frost poem, The Road Not Taken: “Two roads diverged in a wood, and I/I took the one less travelled by”. I could not take the road that leads to Chopta, but the picture perfect Mandal village was no less a surprise to me with its beauty.

Where to Stay : Every town on NH58 has got two-three lodges. There are three very economic hotels at Mandal (I managed a room for Rs. 200) and affordable ones at Chopta.

Food: There are plenty of dhabas on NH58 where one can get freshly cooked Garhwali dishes. However, there are no fancy restaurants in the region.

When to visit: Winter, when it is freezing and the temperature can fall below 0 degree Celsius.

Pack your backpacks and escape