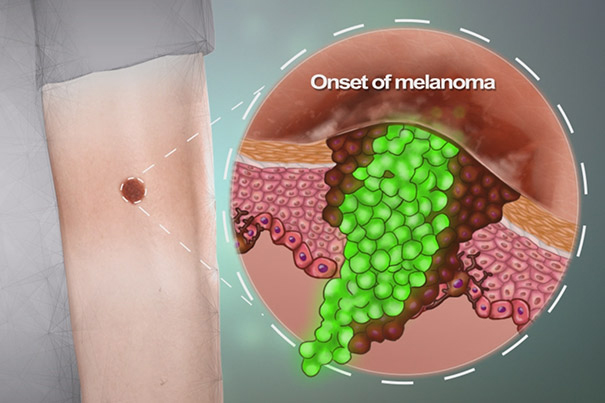 Researchers at Harvard-affiliated Boston Children’s Hospital have, for the first time, visualized the origins of cancer from the first affected cell and watched its spread in a live animal. Their work, published in the Jan. 29 issue of Science, could change the way scientists understand melanoma and other cancers and lead to new, early treatments before the cancer has taken hold.

“An important mystery has been why some cells in the body already have mutations seen in cancer, but do not yet fully behave like the cancer,” says the paper’s first author, Charles Kaufman, a postdoctoral fellow in the Zon Laboratory at Boston Children’s Hospital. “We found that the beginning of cancer occurs after activation of an oncogene or loss of a tumor suppressor, and involves a change that takes a single cell back to a stem cell state.”

That change, Kaufman and colleagues found, involves a set of genes that could be targeted to stop cancer from ever starting.

The study imaged live zebrafish over time to track the development of melanoma. All the fish had the human cancer mutation BRAFV600E — found in most benign moles — and had also lost the tumor suppressor gene p53. 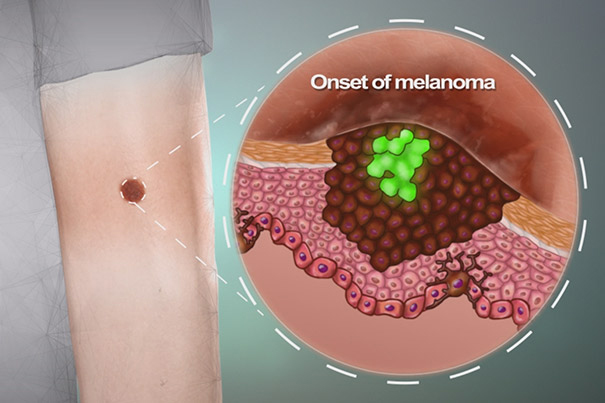 Kaufman and colleagues engineered the fish to light up in fluorescent green if a gene called crestin was turned on — a “beacon” indicating activation of a genetic program characteristic of stem cells. This program normally shuts off after embryonic development, but occasionally, in certain cells and for reasons not yet known, crestin and other genes in the program turn back on.

“Every so often we would see a green spot on a fish,” said Leonard Zon, director of the Stem Cell Research Program at Boston Children’s and senior investigator on the study. “When we followed them, they became tumors 100 percent of the time.”

The cell that caused melanoma
When Kaufman, Zon, and colleagues looked to see what was different about these early cancer cells, they found that crestin and the other activated genes were the same ones turned on during zebrafish embryonic development — specifically, in the stem cells that give rise to the pigment cells known as melanocytes, within a structure called the neural crest.

“What’s cool about this group of genes is that they also get turned on in human melanoma,” said Zon, who is also a member of the Harvard Stem Cell Institute and a Howard Hughes Medical Institute investigator. “It’s a change in cell fate, back to neural crest status.”

Finding these cancer-originating cells was tedious. Wearing goggles and using a microscope with a fluorescent filter, Kaufman examined the fish as they swam around, shooting video with his iPhone. Scanning 50 fish could take two to three hours. In 30 fish, Kaufman spotted a small cluster of green-glowing cells about the size of the head of a Sharpie marker — and in all 30 cases, these spots grew into melanomas. In two cases, he was able to see on a single green-glowing cell and watch it divide and ultimately become a tumor mass.

“It’s estimated that only one in tens or hundreds of millions of cells in a mole eventually becomes a melanoma,” says Kaufman, who is also an instructor at the Harvard-affiliated Dana-Farber Cancer Institute. “Because we can also efficiently breed many fish, we can look for these very rare events. The rarity is very similar in both humans and fish, which suggests that the underlying process of melanoma formation is probably much the same in humans.”

Zon, the Grousbeck Professor of Pediatric Medicine at Harvard Medical School, and Kaufman believe that their findings could lead to a new genetic test for suspicious moles to see whether the cells are behaving like neural crest cells, indicating that the stem-cell program has been turned on. They are also investigating the regulatory elements that turn on the genetic program (known as super-enhancers). These DNA elements have epigenetic functions that are similar in zebrafish and human melanoma, and could potentially be targeted with drugs to stop a mole from becoming cancerous.

A paradigm shift for cancer?
Zon and Kaufman posit a new model for cancer formation, going back to a decades-old concept of “field cancerization.” They propose that normal tissue becomes primed for cancer when oncogenes are activated and tumor suppressor genes are silenced or lost, but that cancer develops only when a cell in the tissue reverts to a more primitive, embryonic state and starts dividing. They believe this model may apply to most if not all cancers, not just melanoma.