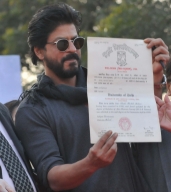 The actor was presented the degree by Hansraj College principal Rama Sharma. He even signed the register after taking the degree.

The 50-year-old, who was a undergraduate student of economics at the college, was humbled by the love showered by thousands of his fans who were waiting to catch a glimpse of him here as he launched a promotional anthem for his upcoming film “Fan”.

Following the event, where he regaled his fans with an impromptu jig and some fun, the “Dilwale” actor tweeted: “What a beautiful day! Thank you university mates and faculty. Love to all for such a memorable emotional moment.”

It was like a walk down the memory lane for Shah Rukh as he recalled his days when he was a student in the city.

“‘Fan’ took me to Delhi, my younger days and today to my college. Thank you YRF and Maneesh. JABRA mazaa aayaa,” he added.

Shah Rukh was accompanied by his “Fan” director Maneesh Sharma, who too is an alumnus of the same college.

The actor has been living in Mumbai for over 25 years, but clearly, he has his heart in Delhi, where he studied at the St. Columba’s School.

Rasika Dugal: In audio content, how you look does not determine your roles