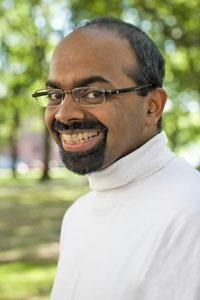 CAMBRIDGE, MA– Researchers at the Harvard University including an Indian-origin scientist have replicated a folding human brain in 3D, revealing for the first time a simple mechanical framework for how it folds.

Understanding how the brain folds could help unlock its inner workings and unravel brain-related disorders as function often follows form.

It shows that while many molecular processes are important in determining cellular events, what ultimately causes the brain to fold is a simple mechanical instability associated with buckling.

Highly folded brains are seen only in a handful of species including some primates, dolphins, elephants and pigs.

In humans, folding begins in fetal brains around the 20th week of gestation and is completed only when the child is about a year and a half.

“We found that we could mimic cortical folding using a very simple physical principle and get results qualitatively similar to what we see in real fetal brains,” said L. Mahadevan, professor of applied mathematics, organismic and evolutionary biology and physics from Harvard John A. Paulson School of Engineering and Applied Sciences.

The number, size, shape and position of neuronal cells during brain growth all lead to the expansion of the gray matter, known as the cortex, relative to the underlying white matter.

This puts the cortex under compression, leading to a mechanical instability that causes it to crease locally, said the team that included scientists from Finland and France.

“This simple evolutionary innovation allows for a large cortex to be packed into a small volume and is likely the dominant cause behind brain folding, known as gyrification,” added Mahadevan in a paper published in the journal Nature Physics.

The team made a 3D, gel model of a smooth fetal brain based on MRI images.

To mimic cortical expansion, the gel brain was immersed in a solvent that is absorbed by the outer layer causing it to swell relative to the deeper regions.

Within minutes of being immersed in liquid solvent, the resulting compression led to the formation of folds similar in size and shape to real brains.

The key to those similarities lies in the unique shape of the human brain.

The research shows that if a part of the brain does not grow properly, or if the global geometry is disrupted, we may not have the major folds in the right place, which may cause dysfunction in the brain, the authors noted. (IANS)