A superhero action film, “Ghayal Once Again” is a sequel to the 1990 released “Ghayal”.

This edition takes off from where its last franchise left off. Snippets of the previous edition used generously as flashbacks in this narration, give the film a strong sense of belonging. 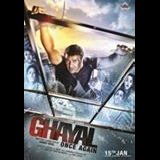 The film belongs to Sunny Deol all the way. It portrays him in a larger than life character.

Ajay Mehra (Sunny Deol) was earlier accused of killing a corrupt business man, Balwantrai. After serving his jail term, he is now an investigating journalist who co-owns a news channel called Satyakam. Though he suffers from PTSD (Post Traumatic Stress Disorder), he is a dreaded man as he goes out of his way to personally clear out all the maladies that prevail in the system, especially corruption.

The film starts off on a tacky note trying to establish the setting of the story and the characters. As the tale progresses, the film finds its focus when four college students stumble upon a murder. And then, the narrative picks up momentum and gallantly strides into the action arena.

As a debut writer-director, Sunny Deol is subtle yet blatant. He takes potshots not only at the system but also cleverly insinuates the powerfully rich members of the city.

Sunny has managed to extract fine performances from every actor. As an actor with brooding eyes, he emits raw emotions with ease. He is agile, brilliant and appealing in the action sequences.

He is efficiently supported by an able cast that includes; Narendra Jha as the business tycoon Raj Bansal, Om Puri as Joe D’Souza the former police officer who is now an RTI activist, Harsh Chhaya as Aditya Raj Guru the editor of The Daily Herald and Manoj Joshi as the politician.

Tisca Chopra as Raj Bansal’s wife and Zakir Husain as the police commissioner, in one-dimensional, stereotypical roles with limited screen presence, are wasted.

But the highlights of the film are the four new youngsters; Shivam Patil as Rohan Kriplani, Aanchal Munjal as Anushka Kriplani, Diana Khan as Zoya and Rishabh Arora as Varun Jain. They are bright and energetic talent who are dynamic and sincere.

The only light moment in the film is the song sequence “Lapak jhapak, lapak jhapak loa”, which is decently choreographed.

With a blend of wide angle shots and close-ups, cinematographer Ravi Yadav’s camera captures the film in minute details. And his live frames seamlessly merge with the computer generated images.

The action sequences packed with fisticuffs and chases, are well-orchestrated on the streets, railways and malls of Mumbai. These backed with the motivational drive and adrenaline boosting sound effects, uplifts the viewing experience.

With a decent production value, the film has a believable and a realistic feel in terms of its setting, but fails in terms of the dialogues, which are packed with cliched and outdated phrases.

Overall, “Ghayal Once Again” is a complex tale that is astutely handled. It will definitely appeal to Sunny Deol’s fans and those who enjoy action films.