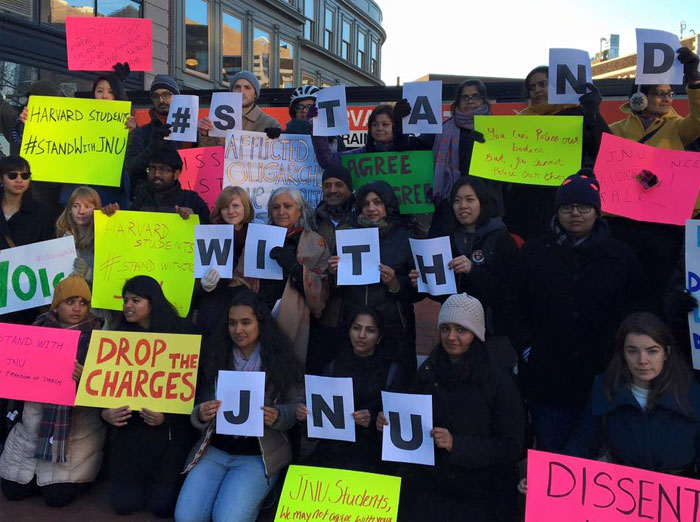 New York–Students from two US universities gathered here to express their solidarity with the students of Jawaharlal Nehru University (JNU) who were arrested in a case of sedition and criminal conspiracy. Earlier, students from Harvard University has protested in Cambridge, MA.

An Indian-American student said during the protest that the primary purpose of the event was to raise awareness about Kumar’s arrest.

“We are protesting against the fact that he was arrested under the sedition law which is very antiquated and very outdated,” Sreedhar added.

Sreedhar, along with several other students read English transcripts of Kumar’s speech during the poetry reading and asked if his words warranted arrest. They also encouraged passersby and attendees to attend a forum discussion at Cooper Union next week.

A student activist at the NYU Sumathy Kumar said she attended the rally because she wants to show her support to the JNU students who were “beaten and arrested and so much violence was being committed against them just for speaking out”.

“I am an activist, and I think we take it for granted sometimes that we have the right to dissent and that home where my parents are from and where I call my ancestors are from, they are not allowed to dissent,” Kumar said.

Anthropology professor Tejaswini Ganti said that she was glad students were voicing support for JNU’s students and that universities should be an open forum for all opinions – even those that dissent against the governing party.