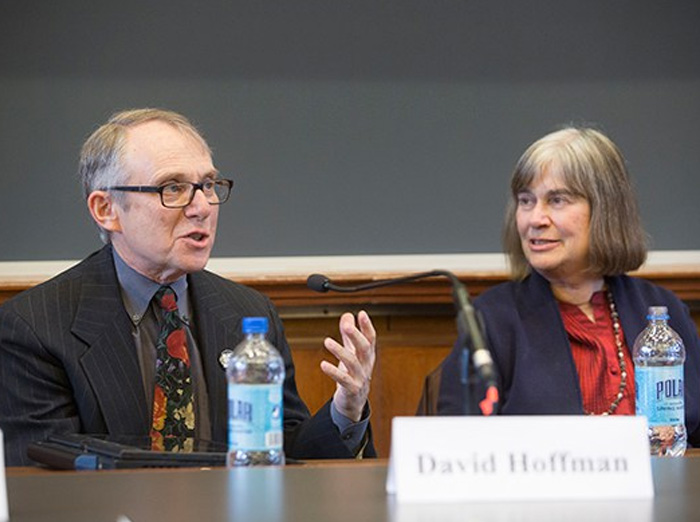 What are the secrets for long-lasting love? Lean closer to find out.

— Never assume anything about each other.

— And, last but not least, open a joint bank account.

With Valentine’s Day near, experts in negotiation, mediation, and lasting marriage shared that advice to a rapt audience at a panel called “Negotiating Love: Interpersonal Negotiation and Romantic Relationships,” held at Harvard Law School (HLS).

The session was organized by the Harvard Law School Negotiators, a student group, to spread the word that effective techniques in interpersonal negotiation apply not only to the vagaries of international trade agreements and mergers and acquisitions but also to people’s everyday lives and to relationships with family, friends, and romantic partners.

The panelists said that practicing negotiating skills such as conflict management, mediation, and dispute resolution can help to decrease the number of quarrels that couples have, and they said that partners can start moving in that direction simply by avoiding making assumptions about each other. Perhaps surprisingly, the panelists said, the latter practice is more common among long-lasting couples.

“The longer people are together, the less accurate they are about their partners,” said Richard S. Schwartz, a psychiatrist and part-time associate professor of psychiatry at Harvard Medical School (HMS), drawing laughs from the audience.

“The longer you’re together, the stronger your assumptions are that you know everything about your partner,” he said. “You lose your curiosity and your wish to explore.”

By keeping curiosity alive, partners are less inclined to make assumptions, the root of many misunderstandings that can create havoc in relationships. Assumptions such as “If you loved me, you should know what I like” or “If you loved me, I wouldn’t have to tell you” should be avoided, the speakers warned.

Instead, couples should speak frankly about their likes and dislikes. If that fails to produce understanding, they at some point can move on to try couples counseling or negotiation skills, said David Hoffman, founding member of the Boston Law Collaborative and the John H. Watson Jr. Lecturer on Law.

When Hoffman asked the audience members how many have taken a negotiation course, half the people in the room raised their hands. Then he asked them to raise their hands if they have used what they learned in their personal lives, and they all indicated they did.

Partners should also practice compassion and appreciation for one another instead of being judgmental and quick to criticize, the panelists suggested.

“We’re experts in what’s wrong with the other,” said Jody Scheier, teaching consultant at the Program on Negotiation at HLS. “When we tell our partners we want to have a conversation with them about something they did, it’s because we want them to change. And that conversation is not going to work.”

One thing that does seem to work is having a joint bank account, according to Hoffman.

A student asked whether it was a good idea to start using negotiation skills early on in a relationship.

“Negotiation is not the path, early on,” said Jacqueline Olds, associate professor of clinical psychiatry at HMS. “You could accidentally kill your relationship.”

Having more positive than negative interactions also helps to nourish the romantic bond, Hoffman said, recommending a ratio of 5:1 for a healthy relationship.

Since the event took place three days before Valentine’s Day, organizers offered chocolate to all who attended.

Rishi Shroff, a student in the master of law program, came with his wife to see if they could learn something.

“I negotiated a few agreements as a junior lawyer,” he said while his wife listened intently. “This is more interesting.”

(The article is reproduced here with permission from Harvard Gazette.)

Most people have no insight about their ideal partner: Study